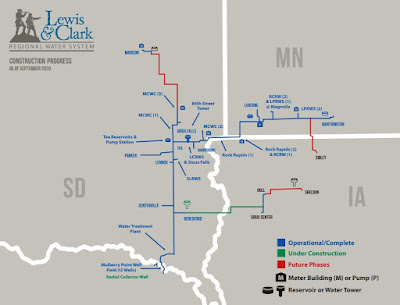 Our Lady of the Arroyo and an interested party had breakfast Sunday morning at Chocolate Maven in Santa Fe. We learned from our twenty something woman server that she grew up in Sturgis, did her undergrad in Vermillion and plans to go the University of New Mexico Law School. She called Kristi Noem, Krusti Nob because she knows Republicanism isn't self-reliance; it's moral hazard.
So, instead of empowering communities to harvest snow melt and rain water rural communities continue to be dependent on politicians who exploit need so they're begging the Biden administration for more money. South Dakota's dairies are wreaking habitat havoc all along the state's border with Minnesota and like most of the state, southwestern Minnesota and northwestern Iowa are Republican strongholds where dairies, swine units and other concentrated animal feeding operations (CAFOs) have devastated water supplies by contaminating wells with nitrates.
Contact with the Big Sioux River can cause spontaneous abortions in pregnant women but the congressional delegations from the tristate region are Republican Earth haters elected to bring bacon home to their districts while decrying socialism, big gubmint and the US Army Corps of Engineers who manage the Waters of the United States or WOTUS.
Now, because of environmental degradation driven by CAFOs officials with the Lewis & Clark Regional Water System (LCRWS) want to expand output from its current 45 million gallons per day to 60 million gallons per day even though water levels in the Missouri River and its basin are at historic lows.

For Madison and four Iowa towns (Sioux Center, Hull, Sheldon and Sibley), the long wait may only last five more years if the United States House of Representatives votes to pass the “Infrastructure Investment and Jobs Act,” which passed in the U.S. Senate on Aug. 10. That bill contains $1 billion for rural water projects across the country. Troy Larson, the Executive Director of the Lewis & Clark water system, said all indications at this time point to the infrastructure bill passing by the end of the year. [Lewis & Clark water system closely following infrastructure bill, final federal funding needed to finish project]

Before it was ousted the Trump Organization's Department of Transportation headed by the wife of Republican former Senate Majority Leader Mitch McConnell awarded more than $5.6 million in grants to upgrade infrastructure and enhance rail safety in the red moocher state that is South Dakota including $2.24 million for the Rapid City, Pierre and Eastern mainline. The move comes after catastrophic plunges in commodities prices, numerous wrecks and water breaches on track owned by RCPE, a subsidiary of Genesee and Wyoming operating just north of the former Milwaukee line on a nearly parallel trackbed.
Now RCPE wants $84 million of the nearly $1 billion South Dakota is getting from the feds despite nobody in the state's Republican congressional delegation is voting for it.
Sixteen Montana counties are now on board to restore an ⁦abandoned Amtrak line.
Imagine Republican South Dakota Governor Kristi Noem’s reaction had Herr Trump had the courage to withdraw American troops from Afghanistan during his term. She’d be moving Afghan refugees into the Governor’s mansion.
Learn more about water rights from David Ganje.

Political leaders in South Dakota who brag about keeping our state "open for business," our economy strong and our budget-surplus growing during the pandemic rarely mention our $4.8-billion allotment in relief from the federal government. Those hated feds can be pretty helpful.