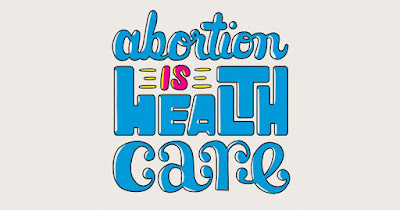 1. A pregnant woman is the patient.
2. Ectopic pregnancies kill women.
3. Rich women have full reproductive rights while women at the lower income margins suffer chilling effects on those rights. Women in Texas, Wyoming and South Dakota who can afford it simply jump on a plane and fly to Albuquerque, Minneapolis, Denver or elsewhere for their procedures. Imagine a woman on the Standing Rock or Pine Ridge doing that.
4. South Dakota’s repeated attempts to restrict access to medical care are not only mean-spirited, they're discriminatory anti-choice extremism.
5. "Pro-life" is simply code for white people breeding. African-Americans terminate pregnancies at about the same per capita rate as white people do but don’t take their jobs. Latinas, however, have fewer abortions per capita but the extreme white wing laments it's hemorrhaging jobs to Latinos.
6. No foetus in the United States has any civil rights until the third trimester. Republicans preach civil rights for human zygotes but deny the protections of the First, Fourth and Ninth Amendments to people who enjoy cannabis.
7. Ending reproductive rights in red states is Balkanizing women's medical care.
8. An acorn is not an oak tree so a foetus is no more an unborn child than it is an unborn grandparent.
9. Republican politicians drive their anti-women crusade simply to raise campaign dollars.
In New Mexico Medicaid covers abortions and even transportation in rural areas to get to clinics in Albuquerque.
But according to SD News Watch 132 South Dakota women traveled to Nebraska for their procedures last year, 152 women scheduled in Minnesota, ten women went to North Dakota, 123 South Dakota women found care in Colorado and Iowa saw a jump of at least 200 out of state women who sought medical care that South Dakota refuses to provide.

Abortion rights advocates say women in South Dakota have for years traveled long distances to out-of-state clinics because of the restrictive laws in their home state. An increasing number of patients from out-of-state have traveled to Colorado for the procedure in the last five years, including women from South Dakota and hundreds from Texas and Wyoming. Abortion rights advocates said they suggest the majority of women in western South Dakota go to Fort Collins, Colo., where they can complete the procedure in one visit. [Danielle Ferguson, SD News Watch]

Email ThisBlogThis!Share to TwitterShare to FacebookShare to Pinterest
piled in I-25, red state failure, tribes, us politics

10. There is no foetal heartbeat until late in a pregnancy. What an ultrasound “hears” at six weeks are cells beginning to built a cardiac system: source.

11. States that ban women from going out of state for their procedures are violating the commerce clause.

12. The extreme white wing of the Republican Party is driving the abolition of women’s rights because they’re wedded to the Replacement Hypothesis.