Remi Bald Eagle emerging as a force in SDPUC race 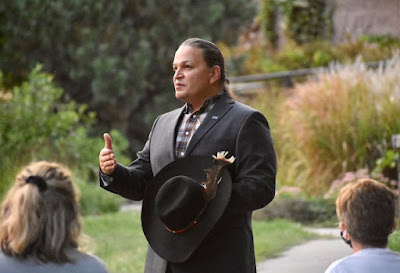 Intergovernmental Affairs Coordinator for the Cheyenne River Sioux Tribe Remi Bald Eagle is the Democratic candidate for South Dakota Public Utilities Commission. Bald Eagle joined the United States Army right out of high school and served with the Engineer Regiment for 22 years. Unusual this election cycle is that the Libertarian candidate will siphon enough Republican votes from Earth hater Gary Hanson so Bald Eagle could emerge victorious.
Utilities are not your friends.
The Big Stone Power Plant in northeastern South Dakota spewed tons of mercury and other pollutants into the headwaters of the Minnesota River until an upgrade in 2016. Owned by Otter Tail Power, Montana-Dakota Utilities and NorthWestern Energy this monster burns 3,500 tons of subbituminous coal every hour so those companies spend millions every year greasing Republican politicians and poisoning waterways.
No corporate taxes, a compliant regulator, a dearth of environmental protection and cheap labor make South Dakota the perfect dumping ground for earth killers like coal and eyesores like wind farms. But according to Republican Public Utilities Cartel Commissioner Chris Nelson the amount of wind power generation may have reached its plateau. In an interview with WNAX Radio Nelson said he believes there will be rapid development of solar power production facilities. South Dakota's GOP/Koch-owned PUC is expected to shoo in the Keystone XL pipeline as they do with each utilities' requests for rate increases.
Avangrid, Inc., a US-based subsidiary of Spanish energy firm Iberdrola with a base in my home town of Elkton, South Dakota plans to spend at least $216 million on a wind farm. That amount of cash would take nearly 17,000 electric subscribers completely off the grid. $100 million spent on subsidizing, manufacturing, transporting, erecting and maintaining the Prevailing Winds project would take some 8,000 Basin Power subscribers off the grid. That's right: primary power purchaser Bismarck, North Dakota-based Basin Electric Power Cooperative is an oligopoly paying Prevailing Winds, LLC to rip up land and disturb cultural resources sacred to numerous Indigenous peoples for a grid that has never been more vulnerable to attack and to climate disruptions.
In 2000 now-dead Republican South Dakota Governor Bill Janklow sold the state cement plant in Rapid City to Grupo Cementos de Chihuahua (GCC). Democratic legislators voted against Janklow's folly because GCC was exempted from mineral severance and was allowed to mine on ground owned by School and Public Lands. Limestone-rich state trust land near Dewey was leased for a dollar for 99 years and could be renewed twice so for three bucks GCC received the mineral rights for 297 years and school kids got screwed. During the 1980s and 90s the cement plant returned about $11 million a year but in 2013 the legislature had to kick in $4 million to the plant's retirement system and South Dakota still surfs the bottom for America's education dollars. Today, West Rapid routinely endures blowing dust and air quality alerts from GCC's quarry operations.
According to Democratic former legislator, Kathy Tyler the Mexico-based land raper has bought up most cement companies in South Dakota with operations in Huron and even in little Holabird east of Pierre. She said the previous owners had no choice; they either had to sell or GCC would put them out of business. In 2018, Black Hills Energy sold some of its 700 oil and gas wells in New Mexico and the Powder River Basin in Wyoming to help finance a $70 million monolith headquarters in Rapid City. It was built there on the backs of subscribers without choices because out of state Republicans who write the tax law own South Dakota and because the state ended environmental oversight. BHE raised much of its construction cash on Colorado cannabis. Now the two monopolies have teamed up to bilk taxpayers.
Microgrid technologies are destined to encourage self-reliance, enhance tribal sovereignty, free communities from electric monopolies and net-metering only gives control back to utilities enabled by moral hazard. Ice storms routinely knock out electric power on American Indian reservations often resulting in lost lives and the inevitable cyber attacks on the US will take down the grid for days, even months causing food shortages and mayhem. The average cost of a household photovoltaic system is about $3/watt or around $12,810 before tax credits are factored in. Leaving the grid has never been easier so anyone who can afford to it should do it now and with Trump still in the White House it's never been more urgent.
South Dakota is most lucrative state to practice medicine. Sanford, Avera and Rapid City Regional now Monument Health enjoy a virtual triopoly so why isn’t there a commission like SDPUC to regulate medical care costs?
South Dakota voters who believe a green energy economy is the future can donate to Bald Eagle's candidacy at Act Blue.

1/2 Political Aspirations & Insights: An Eve with Remi, Brendan & Billie. https://t.co/B2pWfWogrd
$100 per household contribution for Remi for PUC. Hear about current projects, thoughts on the 2020 election, and what their futures hold in regards to politics. pic.twitter.com/3s23FsYKDA