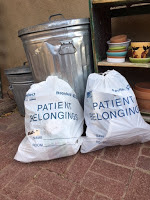 In 2018 the Rapid City Journal blamed the South Dakota Republican Party for spikes in suicides and depression then a Sanford Health executive did the same in 2019. South Dakota is ranked 6th highest in the nation for suicides reporting more than 22 self-administered terminations per 100,000 people or an increase of 59% since 1999 and the 11th highest increase in any state.
So, what’s not to like about six (seven? eight?) month winters, rampant racism, chilling effects on civil rights, an extremist legislature, living in a chemical toilet, sacrifice zone, perpetual welfare state and permanent disaster area?
Veterans are killing themselves because of America's imperialist endless wars but farmers in South Dakota and in greater Trumpistan are ending their lives because of Herr Trump's failure to lead.
Yes, socialized agriculture, socialized dairies, socialized cheese, socialized livestock production, a socialized timber industry, socialized air service, socialized freight rail, a socialized nursing home industry, a socialized internet and now socialized gas well remediation are all fine with Republicans in South Dakota but then they insist single-payer medical insurance is socialized medicine.
Not only has the South Dakota Republican Party failed American Indians by not expanding Medicaid it has failed veterans and the elderly: its historically loyal voter base. And what are the Trump Organization and his earth hater party doing about it? Accelerating the end of all life on Earth, of course.

The number of suicides in South Dakota is up significantly over the past decade, increasing by 40%. At the same time, hospitalizations and emergency room visits for self-inflicted wounds nearly doubled. Falling commodity prices, bad weather, trade wars and isolation are just a few of the problems that farmers are facing today. Net farm income is down significantly over the last several years. Crops are planted, not knowing if they will be harvested at a profit. In the meantime, bills come due and loans must be repaid. The Dykshorn children attend the nearby Christian school. [A growing concern: stress, suicide on the family farm]

"For example, the devastating pandemic has made clear what every rural American has known for decades: On a per capita basis, rural communities are older, poorer, sicker, hungrier, and more reliant on federal programs like Social Security, Medicare, Medicaid, farm subsidies, and SNAP than urban areas. These facts are proven by government data or, better yet, by simply driving through the empty business districts and decaying neighborhoods of almost every rural community today." --Alan Guebert