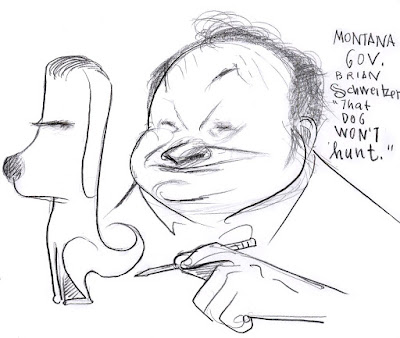 In 2004, in defiance of federal law, Montana voters passed an initiated change to the state's constitution that legalized the cultivation, distribution, and medical use of cannabis. In 2011, after the federal government nipped a thriving industry in the bud and after Schweitzer vetoed a repeal of the law, the state's earth hater legislature passed a statute that Governor Schweitzer allowed to become law without his signature nullifying most of the people's wishes.


"I recently made a number of stupid and insensitive remarks to a reporter from the National Journal. I am deeply sorry and sincerely apologize for my carelessness and disregard," Schweitzer wrote. Schweitzer didn't respond to a request for comment from Business Insider Wednesday. [Colin Campbell, Brian Schweitzer Apologizes For Saying Eric Cantor Set Off His 'Gaydar']

Former Montana Governor Brian Schweitzer would like to visit all of Iowa's 99 counties: a miserable quest even when it isn't -30...or flooding.


But on Monday, asked whether he would run for president, Schweitzer was hesitant. Schweitzer said his record aligns with what “middle America” looks for and runs counter to some Democrats in Washington, making him a winning candidate. [Tal Kopan, POLITICO]

Dave Weigel interviewed Schweitzer for Slate. When asked if Colorado had done the right thing by legalizing cannabis and whether the rest of the country should go that way, he replied:


Well, here’s what I can say. Each society has to make choices about what’s against the law. You have a large percentage of the population that’s already using this. The war on drugs is another war that appears to have been lost. This experiment with prohibition of marijuana doesn’t seem have to been working. Colorado might have it more right than the rest of us.

The sometimes bombastic but widely-liked Schweitzer, chairman of the board of Stillwater Mining Company, Montana's largest revenue producer, had once been considered a shoo-in for the US Senate seat vacated by the retiring Max Baucus now a battleground race.

Above image belongs to Steve Brodner.

Email ThisBlogThis!Share to TwitterShare to FacebookShare to Pinterest
piled in montana politics, us politics