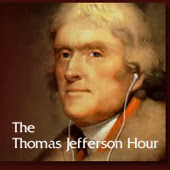 KRCC is Radio Colorado College: one of at least 47 public radio stations rotating weekly through my iTunes folder. Broadcasting on Sundays at 14:00 is The Thomas Jefferson Hour®:


The creator of the program is Clay S. Jenkinson, a nationally acclaimed humanities scholar and award winning first person interpreter of Thomas Jefferson. Clay discusses current American and world events and answers listener questions while in the persona of Jefferson. Clay's answers (as Jefferson) are grounded in his own unique knowledge of the writings and actions of Jefferson; a man of the Enlightenment, a student of human nature and a person of gentlemanly behavior. The host and producer of the program is David Swenson; Grammy nominee, documentary videographer and owner of Makoché Studios. The program is a volunteer effort, funded by The Dakota Institute through The Lewis and Clark Fort Mandan Foundation, a non-profit 501(c)(3) corporation.

Jenkinson describes himself as an historian who initially sided with Justice Marshall in Marbury v. Madison, thought of Jefferson as quirky, mired in the Enlightenment. Now, he has rounded back to the Jeffersonian model, believes that Jefferson would be horrified to learn that the US is operating with a two hundred year old manual, and says we are long overdue for a Constitutional Convention.

Yesterday's show told a story of the addition of the Bill of Rights as an after-thought to what Jefferson believed was a poorly-written document prepared while he was in France.

A spelling error forced the reposting of the poll in the sidebar. Two people who voted earlier: please vote again.
Posted by larry kurtz at 5:22:00 AM

Email ThisBlogThis!Share to TwitterShare to FacebookShare to Pinterest
piled in I-25, public radio, us politics

Intellectually, and almost purely so, a CC is one way to fix what is broken with our governance. It is the most compelling way if it can be shown that the problems we face are not specific but general. For instance, if Corporate personhood cannot be overturned by amendment without breaking large portions of contract law (which is a possibility) then a CC may be the only way to get rid of Citizen's united. If a compelling case can be made, and I'm uncertain that it has been, that the two party structure is what breaks our representation then a CC is almost mandatory. I would prefer a unicameral parliamentary system of legislation, and I could probably make a fairly good comparative advantage argument for it. A case of necessity, maybe not so much.

Pragmatically, however, the thought of a CC in our current environment scares the crap out of me. Calls for fundamental change in the foundations of law generally come from those who are weakest in power and have greatest need. Without a revolution driving those calls, the people in power only join in the exercise if they see a way to consolidate and increase their own base of control. That's the situation I see the US in right now. The right is currently clamoring for a balanced budget amendment, and would be happy to engage in a Constitutional convention if they could write such a thing into the founding document with political will favoring just such a move. Same thing with a denial of the right to privacy in the interest of 'public safety'. The power of a supreme executive with limited voting access has been a goal of the right for a very long time. They would be thrilled with Obama's use of the powers abdicated to him by Congress, if he weren't a black Democrat. In truth, regardless of what progressives would like to see come from a CC, I doubt they'd like the document that comes out of it. Maybe that's cowardice on my part, but as bad a beating as I've seen the Constitution take here of late, it's still the only thing keeping me from being a serf to Global MilCommEntertainuPharm Corp Inc. (Yes, I know that lots of progressives are convinced that we're already in thrall; but if we were, I wouldn't be writing this, now would I?)

Didja ever see the second RoboCop movie, where he gets destroyed by the drug gang? Then all powerful OCP replaces his programming with a bunch of rules to make him a better citizen? Yeah ... think that.

By the way, that was me. I've no idea why Google is pretending not to know me know.

Thank you, Rob: the effects on the existing body of law is what confounds me. How in the world all that would be integrated into a new constitution seems far too daunting to even consider.

Test. Test. 123. I would go higher but there MAY be Teatards reading this!

No I am not in favor of a Constitution Convention, until we get every American voter, educated as to what the Constitution really means( Something not taught by FOX, which has already proven in countless research papers that it makes its intended viewers more ignorant, but maybe both a NPR and Public television education series).

We as a people do not have the educational bonafides among the population, we did in Jefferson's time. Let alone the quality of leadership they had then, to do this in Bipartisanship people friendly fashion.

Rob Kailey is Right on this, with the goofy antics of conservative and evangelical right, all I see coming is an American Taliban, that screws up and destroys American Democracy and republicanism at this time!

FDA part of the Constitution, education free or very affordable at college level! Our EPA to be part of such a Constitution, so no company could ever pollute again without grave consequences, like Board members Jailed for committing crimes against people, and american nature.

Ditto with Banks and Financial Board members, plus reinstatement of Glass Stiegal.

Healthcare for all, Wade and roe instilled in the constition!

Our native People, finally made whole.

Religion, never to be part of government again, and property holdings of religions taxed the minute they own over a million in property value.

Public tax dollars only given in trust to those institutes and Corporations that pay their fair share in taxes back. Small business loans to be easier to get!

A fair tax system with no loopholes and no Protection for companies that open business overseas.

Not allowing any high ranking government workers who enter the private sector the chance to lobby for private interests for 5 years instead of two. No consultation either!

But with the Middle Class American people and the pristine countrysides being neglected.... No way I would support a constitutional convention at this time.

And knowing Jefferson's writings as well as I do.... I really think he wouldn't want it now either.

A system of general instruction, which shall reach every description of our citizens from the richest to the poorest, as it was the ear liest, so will it be the latest of all the public concerns in which I shall permit myself to take an interest. Nor am I tenacious of the form in which it shall be introduced. Be that what it may, our descendants will be as wise as we are, and will know how to amend and amend it, until it shall suit their circumstances. Give it to us then in any shape, and receive for the inestimable boon the thanks of the young and the blessings of the old, who are past all other services but
prayers for the prosperity of their country, and blessings for those who promote it

Thanks for the comments, Montanans. It is my hope that some SoDaks will come by with suggestions as well.