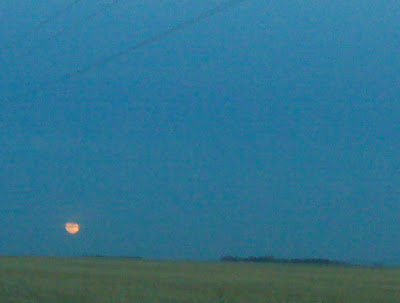 Some get it. Some don't.

Paul of Tarsus was hung over and had been smoking opium when he was overcome with it. Jesus of Nazareth was tempted by it in the desert after fasting. Joseph Smith was 18, drunkenly praying that God would forgive him for sins of debauchery when he got it. Wovoka witnessed a solar eclipse on peyote that compelled a generation of Ghost Dancers.

Maybe it's all in your head.

NPR's religion correspondent, Barbara Bradley Hagerty, went looking for the "God Spot," that place in the human brain that receives the Holy Spirit then compiled her results in a book she called The Fingerprints of God where she describes Temporal Lobe Epilepsy with a scientist's fascination in exquisite detail.

The locals say that you have to know someone to live in St. Onge. Woodman Hall, in the Italianate style, was built in 1910-11; and it was mine for two years. If memory serves, the sandstone was cut from the local Opitz Quarry while the Minnekahta Quarry west of Hot Springs brought stock into Deadwood on the train. A brick factory also operated in Belle Fourche for many years supplying the needs of the area: the limestone accents on the cornice of the Furois likely came from the Centennial Quarry. The second floor has two rooms where meetings and dances were held. The first floor had housed the First National Bank of Deadwood and a mercantile. One of the locals, now deceased and whose daughter owns the Furois Building, used to work for the building crew that built locally for decades. He told the story of how the workers would put nails in their mouths that caused blisters and lesions; so, when the casks came into town on the train, one of the Furois brothers would pee on the nails before them in an effort to deter them.

It was home to The Rancher for at least two decades: very famous to the locals. Have you seen "Rancher-style" beef tips all over the Hills? The original recipe is owned by the operator, Marcille Butts (true story). The restaurant was built in the '60s by Maurice Hoffman but the roof failed and Marcille used to place buckets all around the dining room where rainwater and snowmelt would filter through the pigeon poop on the second floor. She closed it in the early 80s.

St. Onge Sewer and Water Company is the government; the county supervisor for the unincorporated community is a figurehead. Only 100 permits exist and they are handed down like heirlooms. Woodman Hall lost its permit and I exposed the families that control them. The basement fills with water every Spring and has caused some weakening of the spans that support the locally quarried sandstone envelope. The volunteer fire department fills trucks out of False Bottom Creek or Redwater River because the system is inadequate to pump at emergency capacity.

In July of 1997, two and a half years after my younger sister was killed in a car/bicycle accident (she was on the bike), I was drowning my sorrows at Orman Dam.

The full moon nuzzled Bear Butte as a thunderstorm erupting on the western horizon directed the remnants of sunset at the Hills; slashes of fire, then blood splashed the mirror in the south. My sister, out there dancing with Terry Peak in that crescendo of existence-or-not-epiphania said to me, “I am Living Rock, I am Water. All Life begins here.”

I bought Woodman Hall later in 1997 after the roof had been replaced by realtor Bud Tetrault who sold it to me. I gutted the second floor, lived on the first and intended to rent it out to bikers for the Rally. The Company gave me a permit but when I lost the building they took it back so the current owner went to court in an attempt to get water.