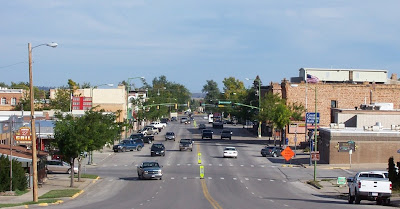 This NPR story verbalizes the decision of one progressive to flee a town once touted as western South Dakota's destination of choice after fourteen years raising two children who escaped hours after their own high school graduations in 1991 and in 1995 for the University of Wyoming. It was good, too. Our meticulously preserved 1902 Furois-built arts and crafts on Canyon Street was adjacent to Spearfish's magical city park.

Kindergarten enrollments have dwindled for the decade and a half since. The resultant soaring median age of the retirees seeking deliverance from the cultural diversities thriving in Colorado, California, and Minnesota drives the exploitation of South Dakota's regressive tax structure and reinforces the racially insulated SDGOP enclave that Spearfish is today. Harley owners, some of whom have ties to clubs with nefarious pasts and many of them pre-1970s graduates of Spearfish High School, cruise the streets in summer and then recuse themselves from the brutal Lawrence County winters for warmer white compounds in Sedona or Mesa. Often, there are elderly parents in one of the ubiquitous long-term care facilities.

But, where are the children? Young families can't afford real estate in, or near, Spearfish. They live in Belle Fourche, Lead, St. Onge, and Sturgis whose populations are more child-welcoming; families shop at WalMart and then drive home. In the winter Exit 14 looks like a monument to the clear-span building that has been air-dropped into Antarctica. Main Street Spearfish is often ignored; a stroll reveals a few 60 or 70-somethings going into the Bay Leaf Cafe, Ace Hardware or one of the banks.  Life-long residents drive to Rapid City and Denver to shop forsaking local merchants.

While Black Hills State College historically brought younger people to the bars downtown, now non-traditional students have become the trend at BHSU. Younger enrollees that just can't afford to attend universities elsewhere also leave upon graduation, a handful of Native students among them.

South Dakota Democrats, be stalwart. It's nothing that the Yellowstone supervolcano won't fix.
Posted by larry kurtz at 2:03:00 AM

This week, the Winner,SD school board held a meeting announcing they would close the middle school on July 1, 2011. They also plan to close the last two rural schools which are about 30 miles away from Winner. They expect parents to drive 120 miles a day to deliver and pick up their children.

The number of students in the Winner System has dropped from around 1700 prior to the building of the "new" Middle School. At the time of building, there were around 1100 students. Now there are just over 600 students K-12. Three schools in the area, Winner, Colome, Witten now have around 950 students..fewer than the number just in Winner around 10 years ago.

I plan to write more on this at Dakota Today if I can dig out some more information.

Thanks for stopping by, Doug.

The census should reveal some sobering conclusions about South Dakota's voting bloc.

Could Democrats remake themselves with more universal appeal?

And although Independent Democrats sounds better than Democratic Independents there must be a way to help us look like the Education Party.