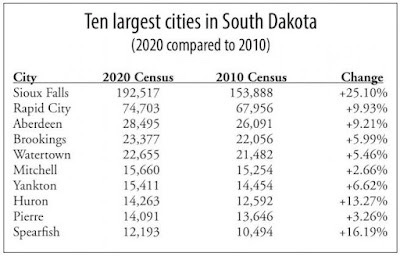 Lawrence County, South Dakota is Orange County now.
The Trumpists want something like the Spanish Civil War and christianic nationalists want Trump to declare himself emperor, dissolve the constitution then rule by executive fiat slaughtering every dissenter who resists.
For a time, Lloyd West, Mike Trucano and Paul Miller owned Deadwood. The Thorpe's strike took down West, cocaine and philandering took Paul down then Trucano retired a rich Republican donating to the Governors Club.
Paul attended grade school and Deadwood High with members of the Fierro family then hired Larry, John and Richard. Their father, Ysidro came from Mexico with his mother Beatrice Antuna and his step-father then married Jennie Grado in Deadwood in 1935 and had thirteen kids. When he died in 2018 he had 50 grandchildren, 103 great-grandchildren and 55 great-great-grandchildren.
After gambling came to the Gulch and Paul got caught trying to put his dick in the help he sold Twin City Fruit's territories, but kept his assets deciding not to build a warehouse in Spearditch. Paul's dad Dave, his uncles Paul and Bruce built Twin City Fruit and told stories about beating checks back to Deadwood driving rickety old trucks on gravel roads from Deadwood to Denver's Denargo Market peddling produce from Scottsbluff, Nebraska back to the Gulch. They owned the Scottsbluff market back-hauling beet sugar and Rockyford melons from the area. Denver-based competitor Nobel also distributed there but it was absorbed by Houston-based Sysco, the division that ultimately bought TCF. Behind the warehouse on Miller Street hundred pound sacks of Colorado and Nebraska potatoes were unloaded from the rail spur that is now home to the Mickelson Trail. Paul's uncle Bruce built the Miller Ranch on old US14 in Spearditch.
In a horsehair coat and hat, Paul seduced my former bartender/girlfriend in 1978 and prompted my move to Missoula, Montana after helping to log out the basin for the Grizzly Gulch Tailings Disposal Project above Pluma and Deadwood. Homestake Mining Company that also operated the sawmill in Spearditch, hired a local contractor who gave a farm boy and School of Mines dropout a skidder job. I returned to Deadwood in '81 and was hired as a truck driver by Paul, a mad genius, who ran the transportation. Brother David, Jr., now a local historian, ran the staff and warehouse until selling his share to Paul while Dave, Sr. ran purchasing. A college friend, with whom I had logged, started working on his doctorate in economics as a truck driver for the family and told Paul about my expertise with heavy equipment.
This NPR story verbalizes the decision of one progressive to flee a town once touted as western South Dakota's destination of choice after fourteen years raising two children who escaped hours after their own high school graduations in 1991 and in 1995 for the University of Wyoming. It was good, too. Our meticulously preserved 1902 Furois-built arts and crafts on Canyon Street was adjacent to Spearfish's magical city park.
After leaving Sysco in 1992 I operated a drywall finish and painting business until 2006 when I left South Dakota again for Montana. By then Mexican nationals were doing much of the logging, roofing, housekeeping and some of the drywall business. They rented in Spearditch, Lead, Belle Fourche and Rapid City often bunking many people with many loud cars in those properties raising the hackles of the locals.
Just hours after taking the oath of office, President Joe Biden issued the Proclamation on the Termination Of Emergency With Respect To The Southern Border Of The United States And Redirection Of Funds Diverted To Border Wall Construction.

What was intended to be a public forum discussion with an elected official turned into an angry yell-fest as a large crowd gathered at Creekside Bean and Vine in Spearfish on Thursday to vent their frustrations to Sen. Mike Rounds, R-S.D., at times even pointing the finger directly at him. “I wanna know, where’s my right to be safe,” one woman demanded. “You did nothing to secure our borders; you were in Congress when Donald Trump tried to get a wall built. I don’t feel safe walking down my own streets. Where is my right to feel safe and why didn’t you do anything about it?” [Tables turn on Rounds at round table talk]

I phoned the son of an old friend who took over his dad's successful painting business based in Spearditch and asked him whether Spanish speakers still do much of the work in the trades. He said many drive back and forth from Gillette, Wyoming after collapse of the coal industry and Lawrence County's property crimes and violence among rival workers peaked in 2018 now Rapid City sees the bulk of the construction site thefts, drunken brawls and housing overcrowding. He told me that in Hill City Spanish speakers became the only applicants for employment at the Neiman-owned sawmill so after Donald Trump was forced from office he shuttered it. The old Homestake mill in Spearditch, now also a Neiman property, is experiencing a similar phenomenon.
The resultant soaring median age of the retirees seeking deliverance from the cultural diversities thriving in Colorado, California, Minnesota, even Arizona and Oregon drives the exploitation of South Dakota's regressive tax structure and reinforces the racially insulated Nazi enclave that Spearditch is today. To little surprise the assisted living, funeral home and florist industries do very well and now that brown workers can take the driver's license exam in Spanish white people can spend more time snorting and shooting meth.
In one of his last efforts before he left as US Attorney for the District of South Dakota Ron Parsons announced the indictment of 37 people including three Mexican nationals then US District Judge Jeffrey L. Viken sentenced four people in connection with that large-scale meth trafficking network bust called “Operation Say Uncle.”
As young people and Democrats flee South Dakota more brown people are doing the work in the red moocher state. Meat processors and industrial agriculture employ the greatest numbers of Hispanics in South Dakota. Spanish speakers prop up the federally subsidized dairy industry East River but in Huron Karen refugees slaughter and process turkeys. The crony capitalism that keeps South Dakota the 8th worst state for the working class is destroying lands promised to native peoples by treaty and my home town of Elkton is struggling to find enough housing for migrant workers often living in squalor.
When my dad visited us in Spearditch he was able to see how most of the fertile land in Lawrence County was incrementally being covered with concrete and housing for white people. He wept as shelter belts were being cleared for center-pivot irrigation and fossil water was being pumped from fragile aquifers for the industrial agriculture now killing his once-beloved Brookings County.
What do these climate refugees and migrant workers have in common with their Midwest counterparts? Christianity. "Pro-life" is simply code for white people breeding. African-Americans terminate pregnancies at about the same per capita rate as white people do but don’t take their jobs. Latinas, however, have fewer abortions per capita and the extreme white wing of the Republican Party knows it's hemorrhaging jobs to Latinos.
And as the Republican Party caves on immigration after Governor Kristi Noem said she won’t accept Afghan compatriots in South Dakota wage slaves could make real social justice change by walking off their jobs then calling for a general strike and bring Kristi to her senses, too.  But until Democrats seize power nothing will ever change.
The reasoning is hardly mysterious: it's all about the money prostitution, the Sturgis Rally, policing for profit, sex trafficking, hunting and subsidized grazing bring to the South Dakota Republican Party destroying lives, depleting watersheds and smothering habitat under single-party rule.
Thoughts? Prayers?
Posted by larry kurtz at 6:57:00 AM

FWIW, the City of Spearfish Public Information Officer told me during a phone call this morning that comments by Senator Round’s’ constituents that city streets aren’t safe are not supported by the facts.

“Most of the meth affecting South Dakota is coming over the SW border.

If @RepJamieSmith is serious about stopping meth, he needs to be calling on @JoeBiden to secure the border.”