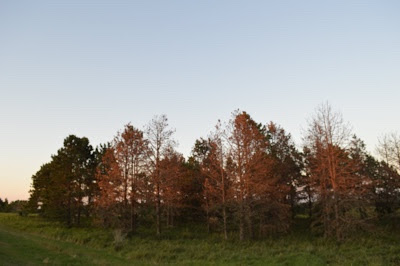 No evidence of pine beetles, this East River grove was likely killed by an herbicide.
The number of acres in 'agroecosystems' has tripled since the 1940s but poor ag practices like tiling have made soils unable to absorb rainfall creating toxic runoff and flooding. In Iowa voluntary buffer strips and other conservation practices have simply failed desertifying parts of the state and causing the Raccoon River to be named one of the most endangered waterways in the United Snakes.
President Joe Biden has established a task force to determine the social costs of carbon and has required federal agencies to immediately begin applying their findings in their regulatory actions and other decision-making.
South Dakota has joined with other mostly red states to resist the Biden initiative in what they say is federal interference because with guidance from the Koch Machine Republican Governor Kristi Noem has learned how to raise money from the extreme white wing of the Republican Party so she’s a pro now.
In 2018 Earth killer Bayer gave South Dakota Republicans some $8000 including $1500 each for Noem and now-disgraced Attorney General Jason Ravnsborg.

Bayer's Carbon Program program pays farmers up to $9 per acre for implementing climate-smart farming methods such as no-till, strip-till or cover cropping, which help sequester carbon in the soil. “Through our Carbon Advisory Panel and meetings with growers, we’ve heard from farmers that they appreciate the simplicity of the program, which allows them to focus on what they do best – raise a crop,” said Leo Bastos, head of carbon business model with Bayer. [Tri-State Neighbor]

Digging into Bayer's plan reveals the deadly truth: it wants to sell fungicides, pesticides and access to proprietary technology to farmers. The Environmental Working Group (EWG) has been analyzing pesticide data from the federal Department of Agriculture and the results are alarming.
Particularly concerning is Imazalil, a carcinogenic fungicide that can alter hormone levels especially in children and adolescents. It was detected last year on 90% of citrus not grown organically in the United Snakes. DCPA, sold under the brand name Dacthal, was banned in Europe in 2009 but is still widely used in the US on kale and other greens as are neonicotinoids, pyrethroids and some 20 other pesticides. Also banned by the European Union are the organophosphate insecticides acephate and chlorpyrifos that can harm developing brains but the Trump Organization refused to block chlorpyrifos from being used on US produce. High levels of glyphosate, a known endocrine disruptor, are also found in oats, chickpeas and corn sugars.
These findings come at a time when Republicans in dangerous red state legislatures, including South Dakota's, are targeting kids. But South Dakota Republicans don't want schools to even talk about the causes of gender dysphoria. Why? Because their campaign dollars come from white christianists like the Family Heritage Alliance, the LGBT-bashing Family Research Council and especially the hate group that calls itself Alliance Defending Freedom.
Republican welfare farmers are the real ecoterrorists who hate subsidies unless they benefit from them. Kristi Noem and Mike Rounds have taken federal handouts amounting to nearly $5 million.
Learn more about the "spectacular failure" of voluntary conservation and human risks to American waterways linked here.
Posted by larry kurtz at 7:22:00 AM