By opening schools Noem would commit genocide in Indian Country 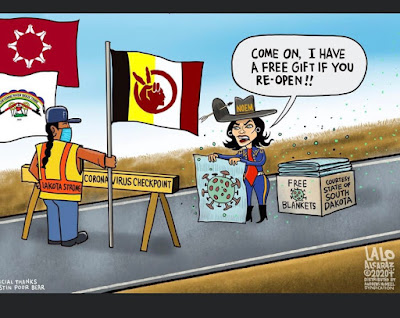 We all know Republican South Dakota Governor Kristi Noem is a racist but now my home state has gone from being America's laughing stock to becoming a co-conspirator in hate crimes. Of course she knows Native Americans and other children of color are more at risk to Covid-19 so exposing them in greater numbers translates to fewer Democratic voters.

Democratic Attorneys General are gathering evidence that Donald Trump is committing crimes against humanity not just in New Mexico but in all of Indian Country.

The Obama Administration cut funding to the lab in Wuhan after teams from Australia, the US and China discovered this novel coronavirus strain in 2014 but it took Donald Trump to weaponize it. In past years the Trump Organization has used the federal courts to punish tribal nations who built casinos Trump said were competition but today the White House is slow-walking resources to reservations while deploying COVID-19 as a biological weapon in Native America.

That "Pocahontas" thing Trump does to Senator Elizabeth Warren doesn't just betray his hatred for women; it's a tell that he loathes American Indians no matter how much or how little Native blood a person has. That Republicans continue to prop up his assault on the courts and stoke his criminal race baiting is the most telling aspect of this march toward the abyss.

Make no mistake: Donald Trump and Republicans like Kristi Noem are targeting Indian Country for annihilation. His Tulsa trip and the Sturgis Rally in occupied South Dakota are spreading the virus all over Native America. It’s called ethnic cleansing even genocide elsewhere but in Trump’s America it’s called patriotism. Unless Republican Earth haters recognize the clear and present danger this president represents doom is imminent.

The institute was the brainchild of Trump’s longtime lobbyist and consultant, Roger Stone, and Trump himself was hands-on — not just paying the bills, but signing off on ad copy or radio scripts depicting the tribe as violent criminals and drug dealers. When Stone hired private investigators to dig up dirt on the Mohawks, Trump secretly paid the bills. [LA Times]

Gov. Noem has simply become a pinup for Trump and the Kochs so boycotting South Dakota is apparently the only language the Republican Party seems to understand.

More than 250,000 people are expected to rumble through western South Dakota for the annual motorcycle rally in Sturgis, sparking worries it could cause an unmanageable outbreak of COVID-19. https://t.co/OPWCw51juK