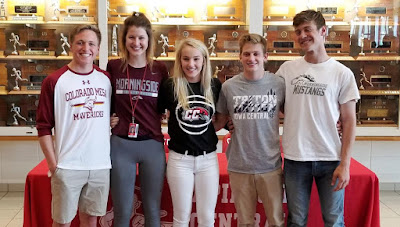 Just the thought of a daughter living in Sioux City Fucking Iowa is nightmare-inducing.

She's the tall one on the left in the photo.


On why she chose Morningside College: "It was really just about the coach (Beth Donnelly). I met with her and she was so phenomenal," Kurtz said. "I've always loved volleyball, and I felt a connection. I'm really excited about next year."

On playing volleyball at the college level: "It's going to be a challenge. I got my summer workout sheet and went 'ahhh,' she said with a laugh. "But it will be okay. I have always been competitive, and it will be so much fun." 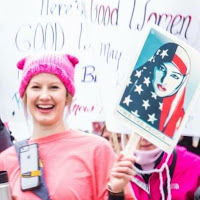 She has already been busy at Central and joined her Cobbler compatriots in walkouts in memory of seventeen people murdered at a Florida school.


Central High School Senior Rose Lamoureaux says, "The idea originated with the Majory Stoneman Douglas students in Florida after the massacre happened. It was theater students actually who started this. They decided they wanted to be heard. Their voices were going to be heard. It spread really quickly because we feel that our safety is the most important thing because it's a learning environment. This is where we should go to feel safe." [KEVN teevee]

Some members of Rapid City's law enforcement industry believe more guns in schools is no solution to violence and may exacerbate tensions.

The Pine Needle talked with Principal Michael Talley about students’ participation in the National School Walkout as well as how the school is keeping students safe.

In lieu of students at Marjory Stoneman Douglas High School in Parkland, Florida leading a National School Walkout on March 14th to protest current gun laws, I sat down to talk with our principal, Michael Talley, about students at Central participating.

He told me he’s working with various students to organize a safe experience: “I don’t want students walking out in traffic so I’m working with different students to have a sit-in type of event. We could meet in the auditorium or the gym and students could get up and talk about the gun violence and voice their opinion.” He’s completely supportive and wants kids to get involved, though he does want it to be the students’ movement.

We also talked about the the A.L.I.C.E. training that schools are implementing in their classes. Teachers are training their students to prepare for a shooter: leave the class if the shooter is in the opposite side of the building, barricade the door if he/she is close, and if the shooter manages to break in, grab backpacks, grab chairs, books, computers and hurl them his/her way. The number one rule is don’t do nothing. Your lives are in your hands.

I told Talley that no matter how much we prepare, no one knows how they would react until they’re in that moment. The sheriff deputy during the Florida shooting stayed outside, did not go into the school. If cops with the most training can’t take down an active shooter, how can you ask kids to do that? He reassured me, “Even if you’re not comfortable, I’m sure the majority of the male students in your class will take action and make sure the job gets done.” I also asked him how he felt about arming teachers and he told me that he “could think of more cons than pros. Teachers are here to teach and it’s not their job. We have two armed liaison officers who can report to the scene in seconds.”

Her older sister is leaving South Dakota for blue state Minnesota at the end of July.

Email ThisBlogThis!Share to TwitterShare to FacebookShare to Pinterest
piled in ip