Mount Rushmore is the state's premier example of racist ideology. Its sculptor was a member of the Ku Klux Klan.

Calling him a rapist some twitter accounts are calling for the removal of Rapid City's statue of Bill Clinton. Fact is: most of the downtown statuary depict slave owners, a child rapist, war criminals and figures in history that ordered the murders of Natives.

Thomas Jefferson began raping Sally Hemings when she was fourteen. Andrew Jackson and Martin Van Buren drove thousands from their lands and to their deaths over the Trail of Tears. Harry Truman dropped two atomic bombs on civilians.

The United States was founded on the backs of slaves as systematic genocide became a way of life for white christians quoting scripture as they slaughtered their fellow humans. After colonizers realized enslaved American Indians had no resistance to diseases brought from the Old World, Africans were imported to do the dirty work. George Washington became a warlord because slaves created the wealth that afforded him cannon, powder and ball. 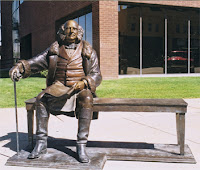 Confederate flags routinely fly in Rapid City showing support for racism in like-minded states, South Carolina and Mississippi. Many more come out during the Sturgis Rally.

Moody and Pennington Counties struggle with racism on a local level.

As bikers in the Black Hills can still be seen flaunting their racist bents flying the flag of slavery from their machines Gettysburg, South Dakota remains a white supremacist stronghold.

The Potter County city of Gettysburg will not be removing the Confederate Flag from patches of the police department. ["...Without the war, and without the Battle of Gettysburg, we would not be the same City that we are. The Chief of Police, Bill Wainman, the Mayor, Bill Wuttke, and the City Council have no intentions of changing the police patch."]

Helena, Montana has removed its Confederate shrine after outcry from the state's American Indian legislative caucus.

Right to life? Not if you're non-white in South Dakota.

Filmed almost entirely in western South Dakota Dances With Wolves opened in theaters on this date in 1990.
Posted by larry kurtz at 7:57:00 AM