Ellsworth Air Force Base near Rapid City has lost at least two aircraft in southeastern Montana, tells people that 'malfunctions' plague the aircraft yet acknowledge that bird strikes are all too common.


Ranchers north of Belle Fourche are getting angry because of a proposed expansion of an Air Force training area that would have bombers from Ellsworth Air Force Base flying at low levels over their ranches. Tom Davis says his sheep and cattle may run through fences if they're spooked by the big aircraft flying just a few hundred feet above the terrain. A statement from Ellsworth Air Force Base says the expanded air space is necessary to allow multiple aircraft, or formations of aircraft, to use the individual training areas simultaneously. It also says the close proximity of what is called the Powder River Training area to Ellsworth will decrease costs for taxpayers. [Al Van Zee, KEVN teevee]

In a letter to the Secretary of the Air Force and to the Air Force Chief of Staff, Montana Senators Jon Tester and John Walsh have voiced their opposition to the proposed expansion of the Powder River Training Complex in southeastern Montana. Citing the potential loss of 95 Montana jobs, concerns over the safety of Montana citizens from aircraft based at South Dakota's Ellsworth AFB and outcry from residents in the area, the Senators wrote that they are unwilling to include the Little Bighorn National Battlefield within PRTC.


"I would never wish on anybody the noise impact that comes from a B-1 bomber flying over at mach one," says Marvin Kammerer, whose ranch is adjacent to the base. "Thirty-six people have died in plane crashes on this ranch over the years," he adds. Residents worry that the airspace would become too dangerous for civilian planes, turbulence would disrupt wind farms, flares would start wildfires, chaff would sicken livestock, and sonic booms would interrupt the peace and quiet. [Emilene Ostlind, Who's terrorizing who?, High Country News]


WildEarth Guardians is based just up I-25 from the ranch yet they have had far-reaching influence on sage grouse and wolf protection in the Northern Rockies.


A review by WildEarth Guardians found considerable overlap between coal fields in the western U.S. and sage grouse priority habitat, particularly in the states of Colorado, Montana, North Dakota, South Dakota, Utah, and Wyoming. While mining activities have large remained out of priority habitats, in some cases expanded mine operations threaten priority habitats. In southeastern Montana, plans to expand the Spring Creek mine, a massive coal strip mine in the northern Powder River Basin would destroy an extensive swath of priority habitat. [press release, Coal Mining Threatens Imperiled Sage Grouse With Extinction in Western U.S.]


I made mention of this on a previous post, but has anyone questioned Rich Sattgast on why these reimbursement requests were approved by the State Auditor's office with such sloppy documentation? The State Auditor is independently elected to serve as a watchdog for taxpayer money. They are supposed to be the checks and balances part of state government that insures claims paid by the state are appropriate. [comment, AnnieTee, Madville Times]

Sen. Bradford wonders about abortion bills being brought despite ongoing lawsuit — was told to not bring ICWA bills due to lawsuit.
— David Montgomery (@ArgusMontgomery) February 26, 2014 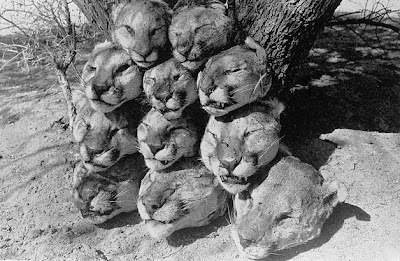 
The gray wolf found dead Monday morning near Pine Ridge made a 400-mile journey from Yellowstone National Park to southwest South Dakota in less than two months, a U.S. Fish and Wildlife Service wolf specialist said Tuesday. Mike Jimenez of Jackson, Wyo., said information received from the radio-transmitter collar on the wolf identified it as a 3- to 4-year-old male that was part of a wolf pack in the southeast part of Yellowstone. --Kevin Woster, Rapid City Journal

South Dakota Game, Fish, and Plunder has been systematically exterminating the cougar population that had been discouraging wolves from migrating into the state.
Posted by larry kurtz at 1:04:00 PM