Legal cannabis is a legitimate alternative to Big Dope

Use of the word 'pot' to describe cannabis isn't journalism, it's propaganda.

Twenty five Pueblo County, Colorado students will receive scholarships derived from the county’s cannabis excise tax even as pro-cannabis Growing Pueblo’s Future filed an official complaint with the Secretary of State’s Office claiming that there are three campaign finance violations by Citizens for a Healthy Pueblo which circulated a petition asking for a ballot measure that would ban the industry in the county.

Seventy eight percent of Colorado high school students have not ingested cannabis in the last 30 days according to a survey just released by the state's Healthy Kids initiative.

In fact rates of consumption have remained flat or even declined since the herb was legalized there. The most common method among teens of obtaining cannabis was through gifting.

Studies in the Netherlands and Portugal have revealed that legalization causes cannabis to seem passé to teens who experiment with taboos.

Moorhead, Minnesota opened their first therapeutic cannabis dispensary last Saturday while North Dakota supporters petition to legalize on that state's November ballot. In New Mexico the therapeutic cannabis industry is controlled by ten guys, profits go elsewhere instead of to the beleaguered pueblos and reservations.

Obsessing over legalization and fretting over teens getting stoned in mom's basement when opioids are killing tens of thousands of people a year while Big Pharma bribes physicians to prescribe dangerous drugs is simply rank hypocrisy.

Screw Nebraska. Flood the state with cannabis grown in the Oglala Lakota Nation.

Let’s ensure that cannabis cultivation and distribution stay out of the hands of Big Dope. It’s time to enter compacts with the tribes, let them distribute on the rez, on off-reservation properties and in Deadwood.


Former Bernalillo County Sheriff Darren White says he is no longer a certified law enforcement officer, doesn’t have a concealed handgun carry license but does own a firearm. White has also publicly disclosed that he is a medical cannabis user and an investor in a new medical marijuana grower and dispensary in Albuquerque, as well as its chief administrator and security chief. As of May, about 25,000 people had medical marijuana cards issued by the Health Department. About 41,000 New Mexicans had concealed handgun carry licenses in 2014, the most recent year for which statistics are available. [Albuquerque Journal]

Under a surge of patients' applications the New Mexico Department of Health is under fire for extended delays of new cards for therapeutic cannabis.

The Bureau of Alcohol, Tobacco, Firearms and Explosives (BATFE) will make sure you lose your Second Amendment rights if you admit to ingesting cannabis or even if you are a patient being treated under the care of a doctor.

From Brian Doherty's piece at Reason:


Merely having a state medical marijuana card, BATFE insists, means that you fall afoul of Sect. 922(g) of the federal criminal code (from the 1968 federal Gun Control Act), which says that anyone “who is an unlawful user of or addicted to any controlled substance” is basically barred from possessing or receiving guns or ammo (with the bogus assertion that such possession implicates interstate commerce, which courts will pretty much always claim it does). While the BATFE has not yet announced any concerted program to go after people who may have had legally purchased weapons before getting a marijuana card, Morgan Fox of the Marijuana Policy Project says that it’s common practice in medical marijuana-related busts that “if weapons are present, there will be gun charges added on as well.”

Representative Earl Blumenauer of Oregon, another state where cannabis has been legalized, has teamed up with Colorado congress member, Jared Polis: they have introduced legislation that would end the federal prohibition.

As tribal nations mull the Justice Department's memorandum on legal cannabis within reservation boundaries and BATFE remains free to pop anybody in Indian Country more clashes and lawsuits seem inevitable.

In my view, the time is long overdue for us to take marijuana off of the federal government’s list of outlawed drugs.
— Bernie Sanders (@SenSanders) June 17, 2016

Email ThisBlogThis!Share to TwitterShare to FacebookShare to Pinterest
piled in cannabis, Earth, I-25, montana politics, tribes, us politics

Mike Maltaverne is one of the most honorable, competent men to ever run a fire department or to date a daughter.

Personnel from the South Dakota Division of Wildland Fire and volunteer fire departments from nearby Black Hawk, Interior and Piedmont are headed to New Mexico to help local communities affected by the Dog Head and North fires. Evacuations are underway as the wildfires grow. At least twenty five homes have been destroyed by the Dog Head blaze and the New Mexico National Guard is patrolling to prevent looting.

New Mexico has been the first state of the season to see extreme wildfire behavior before.

But look on the bright side, people: your lives could be much worse; you could be living in Aberdeen, South Dakota.

Just across the border from South Dakota, Campbell, parts of Weston and Crook Counties, Wyoming are under a red flag warning at press time.

Republican former US congress member from New Mexico, Heather Wilson, is president of South Dakota School of Mines in Rapid City. The Libertarian Party of South Dakota has been recognized by the Secretary of State's office where former New Mexico Governor Gary Johnson and his running mate will appear on November's ballot likely helping turn that red state blue this cycle.

After a century of fire suppression, a decades-long moratorium on prescribed burns, a lack of environmental litigators and GOP retrenchment the Black Hills National Forest is also expecting an active wildfire season.
Posted by larry kurtz at 5:56:00 AM No comments:

Email ThisBlogThis!Share to TwitterShare to FacebookShare to Pinterest
piled in Earth, I-25, sd politics

Love meets the eye of the beholder 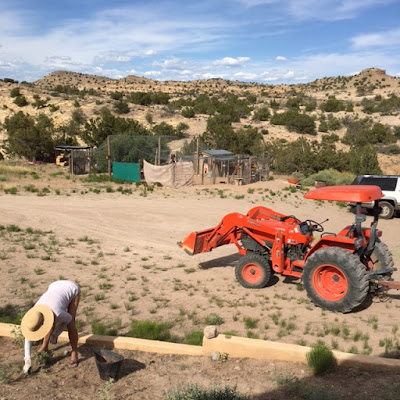 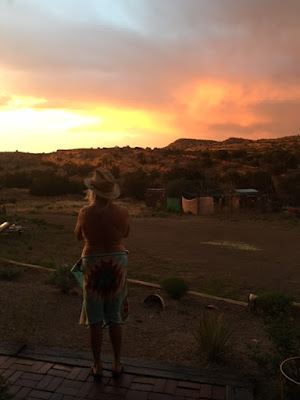 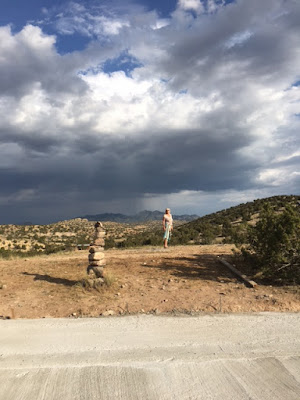 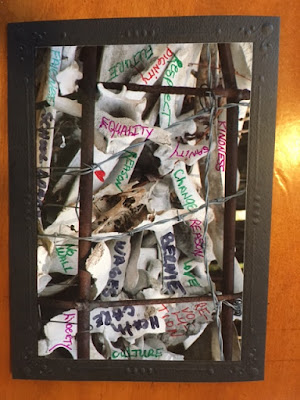 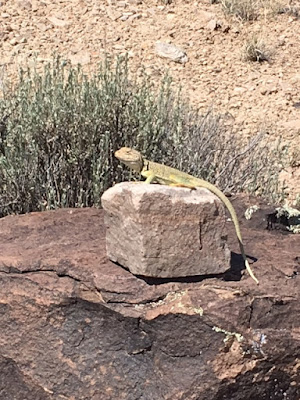 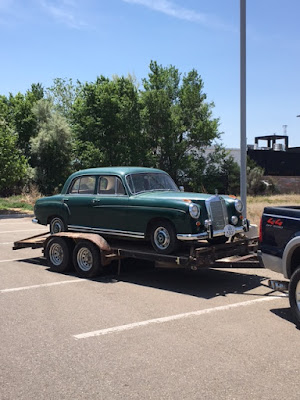 Urban dinosaur
Posted by larry kurtz at 7:11:00 AM No comments: 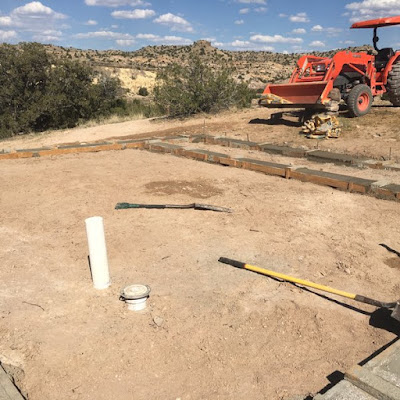 Footings are poured for La Casita de las Tres Hermanas. Slab is next then adobes. The pad sits on about eighty cubic yards of New Mexico earth moved in the bucket of the Kubota from lower on the property. 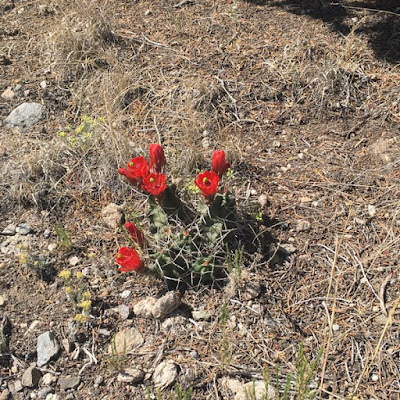 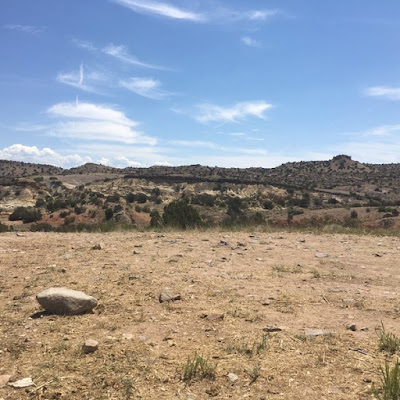 It's pretty easy to feel the five thousand plus years of human history etched into this New Mexico formation across the arroyo from La Casita. 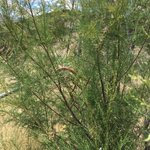 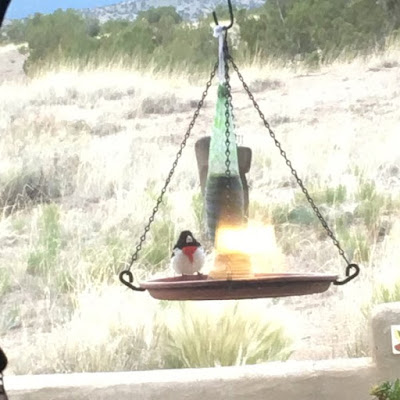 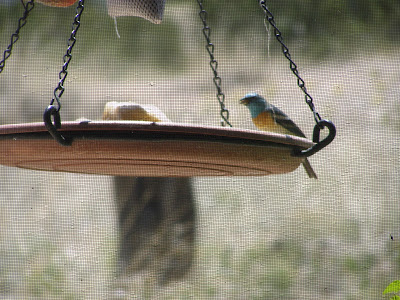 Our Lady of the Arroyo took this shot of a lazuli bunting at the feeder through the porch screen. Nice, huh?
Posted by larry kurtz at 4:06:00 PM 4 comments: