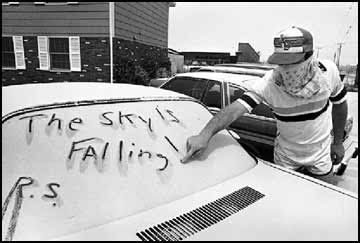 I recall this from the hang glider launch on Mt. Sentinel on 18 May, 1980. The wind was dead all day and we passed the time kicking the hacky sack. Late in the afternoon a massive cloud filled the western horizon so everybody but me, the driver that day, ran their gliders into a scant breeze to beat the weather. By the time I got off the mountain and back to the landing zone at the golf course, the sky was so dark the street lights were coming on.

Not having thought to turn on a radio, I was totally freaked when ash began falling from the sky. Only after running back to the pickup and turning on the news did I learn. The next week in Missoula was spent inside with the windows duct-taped shut and not being able to see the sun or even across the street, for that matter. An emergency executive diktat from the governor shut the town down. Stores ran low on essentials and going outside meant stinging eyes and sand gritting in your teeth. After a week of cabin fever, I took the top off my '65 Land Cruiser, drove into the Rattlesnake, and saw my first black bear in Montana.

Little known fact: I brought the first mountain bike to the state of South Dakota from Missoula in 1980 and sold it to Robb Rasmussen at Sioux River Cyclery in Brookings because I needed the money to get back to Deadwood. The movement in Missoula grew out of the cruiser BMX craze and I had built three by then at Schubert’s Bike Shop from old Schwinn frames with Shimano parts long before the first Specialized Stumpjumper was mass-produced in 1981.

Living with regret is a waster of mind and space so I have but one even after my little sister was killed on her mountain bike outside her Moody County farmhouse in 1995: I should have bought the Bike Rack in Spearditch when I had the chance in 1983.
Posted by larry kurtz at 8:49:00 AM No comments:

Email ThisBlogThis!Share to TwitterShare to FacebookShare to Pinterest
piled in Earth, ip, montana

When the people of the Chaco Wash were building in what is now northwestern New Mexico the ancestors of the Lakota were living in post-archaic North Carolina.

Email ThisBlogThis!Share to TwitterShare to FacebookShare to Pinterest
piled in Earth, tribes 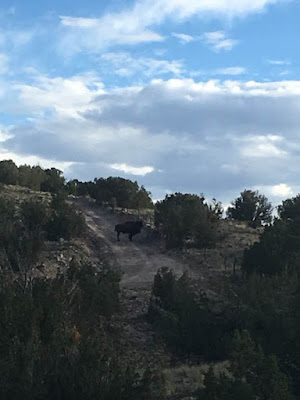 Yes, you’re not crazy. That’s a bison at large on Red Rock Road. He's probably a refugee from the Rancho de Chavez. He has been hanging around the casita because there's water up there. With some luck he got his picture taken by the trail cam at the windmill. 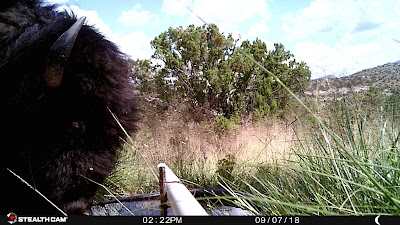 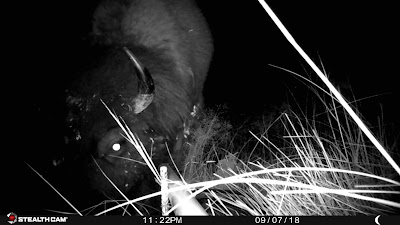 Email ThisBlogThis!Share to TwitterShare to FacebookShare to Pinterest
piled in Earth, I-25, pix

Buy your guns then apply for a cannabis card 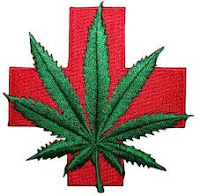 
While more than 16,000 Nevadans still hold state-issued medical cards, that number has dropped by nearly 12,000 in 15 months since recreational marijuana sales began. Industry members and patients have complained the state medical cards, which cost $100 for two years and require a doctor’s note as part of the application, are not incentivized enough under the current tax model. State medical cardholders pay 10 percent less taxes than recreational customers, meaning cardholding patients would have to buy $2,000 to $2,500 worth in product to account for the cost of doctor’s fees and state licensing. Medical marijuana patients with state-issued cards are banned from owning firearms, and in some cases, lose benefits as military veterans. [‘I’m alive again’: Las Vegas marijuana patients celebrate plant’s life-changing role]

Republican-glutted states are the drunkest, kill the most kids, are the most obese and most addicted to opioids. States with the most alcohol-impaired driving deaths are Montana, South Carolina, North Dakota, Alabama, South Dakota, Texas and Wyoming so the idea that legal cannabis drives violence is more than laughable; but, the Bureau of Alcohol, Tobacco, Firearms and Explosives (BATFE) will make sure you lose your Second Amendment rights if you admit to ingesting cannabis or even if you are a patient being treated under the care of a doctor.

Representative Earl Blumenauer of Oregon, another state where cannabis has been legalized, has teamed up with Colorado congress member, Jared Polis and introduced legislation that would end the federal prohibition on cardholders buying firearms.