Loss of New Mexico passenger rail is a failure of conscience 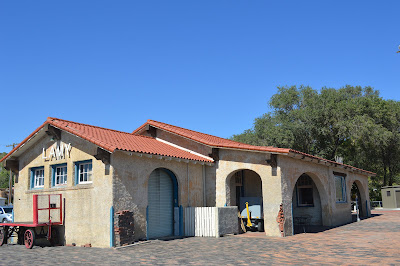 Our Lady of the Arroyo and this interested party were in Lamy yesterday and took the opportunity to have a long talk with Bob Sarr before picking up a couple who got on Amtrak's Southwest Chief at Chicago.


Amtrak said Friday it plans to close the sales window at the century-old Mission Revival-style station, a casualty of changing ticket-purchasing habits. The station itself, which functions as the Santa Fe stop on the Southwest Chief route between Chicago and Los Angeles, will remain on the line, despite some concerns to the contrary voiced recently by Santa Fe County officials. The Atchison, Topeka and Santa Fe Railway built the Lamy station in 1909. The ticket window is the second train-related loss to strike the small community southeast of Santa Fe in quick succession. [Santa Fe New Mexican]

The State of New Mexico bought the track bed from just north of Lamy to Behlen from the Burlington Northern Santa Fe Railway when the Rail Runner was built. BNSF owns virtually all the rail rights of way in New Mexico.


When it took on debt to build the Rail Runner, the state opted to shift major payments on the train until the last years of those bonds, with the money primarily coming out of the state road fund. Now linking Santa Fe to Albuquerque and points south, the Rail Runner’s declining ridership has led fiscal hawks in particular to argue the commuter rail system amounts to a boondoggle. That means the state would pay off the Rail Runner over a longer period of time — for three more years, through 2030. It also means the state would start paying off a bigger share of the debt sooner, smoothing out the big spikes in payments. [Santa Fe New Mexican]

My maternal grandfather was a career conductor for the Union Pacific Railroad. I have at least one vague memory from my toddlerhood going over the Continental Divide in Colorado while riding the California Zephyr between Omaha and Emeryville, California near Castle AFB where my dad was stationed and the place of my birth. Now, growth on the Front Range is driving planners to pick up the pace on passenger rail.

The absence of a solution to the rail crisis in New Mexico represents a massive failure of conscience. 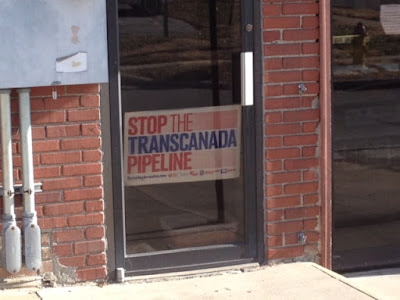 Say shit and it comes sliding in on a shovel.

Nearly twice as much as originally believed or some 407,000 gallons of oil leaked last year from a faulty Keystone pipeline in Marshall County, South Dakota just days before Nebraska officials announced its decision on an alternative for an additional TransCanada route.


"The Keystone XL pipeline will never be built," said Kleeb. "TransCanada clearly does not have the support necessary for this project, since the company could secure just 500,000 bpd of commitments from shippers on its 830,000 bpd-capacity pipeline — and that's only with a giant subsidy gift directly from the Canadian government. What's more, the landowners' lawsuit challenging the Nebraska Public Service Commission's approval of an *illegal* pipeline route is still set to be heard."

Further construction of KXL through Nebraska won't happen for at least another year.


Landowners on Monday submitted a 36-page brief to the Nebraska Supreme Court, asking the court to nullify the Public Service Commission’s approval in November of a route for the pipeline across the state.

Get the rest here.

The same geology that forces engineers to rebuild I-90 through West River South Dakota every year also makes construction of the Keystone XL pipeline untenable.

While East River, South Dakota has been destroyed by industrial agriculture West River remains mostly intact but that is changing.


After years of frenetic drilling, the environmental footprint on the reservation is visible in all corners. Flaring, the practice of burning off excess natural gas that’s too expensive to get to market, is evident throughout the reservation. Environmental disasters like the pipeline leak in 2014 that spilled 1 million gallons of salt water that contaminated Lake Sakakawea are not uncommon. The contaminated water, a waste byproduct of oil production, flowed through a ravine and into Bear Den Bay of Lake Sakakawea. These same problems could occur along the shores of Lake Oahe. Is the State of South Dakota prepared to handled the higher traffic rates, the environmental concerns, and the increase in crime that follow these booms?


Meade County highway superintendent Lincoln Shuck said the six-year-old road haul agreement, signed by another county road superintendent and a largely different county commission, needs to be re-examined before any use of roads by TransCanada vehicles begins. “It should be revisited whenever there is a new commission so everyone’s on board,” Shuck said.

After Manape LaMere renounced his citizenship, disenrolled from the Yankton Sioux Tribe, and gave up his Social Security number he joined the resistance to the proposed Keystone XL Pipeline at the Wiconi Un Tipi Camp near Lower Brule.


He describes the current state of American-tribal relations as that of an apartheid government toward an oppressed minority. To break free from that dysfunctional relationship, tribes must break free from America completely in order to be treated as equals, LaMere said.

The Cheyenne River Sioux Tribe has created a website to raise funding and awareness for the dispossession of treaty land, natural resources and to provide information about the nation's battles against the Dakota Excess and Keystone XL Pipelines.

Photos are of Caffeine Dreams taken in 2013 before they moved from their downtown Omaha location. 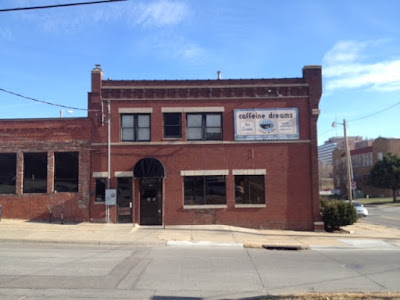 According to the journalist who covered the case for the Santa Fe New Mexican, court records in a lawsuit brought by Russell Means' widow state it was dismissed some time ago with mutual agreement from all the parties likely signaling a settlement.

Pearl Means' ties to her stepkids were not known at post time.

Means has challenged Randy Seiler for the Democratic nomination for attorney general. She is currently the attorney general for the Oglala Lakota Oyate and lives in Rapid City.

Email ThisBlogThis!Share to TwitterShare to FacebookShare to Pinterest
piled in I-25, ip, sd politics, tribes

Another round of geoengineering in PRTC scheduled for May

In the name of geoengineering or albedo modification the Air Force routinely sprays into the atmosphere over the ocean and above parts of at least four states an aerosol cocktail of silver iodide, lead iodide, aluminum oxide, barium, frozen carbon dioxide, common salt, water and soot burning hazardous waste in pits concocted at US Air Force bases including those at Ellsworth AFB near Rapid City, South Dakota.


Combat Raider, a large force exercise involving various military aircraft, is scheduled to begin May 15 in the Powder River Training Complex, and will conclude May 17, 2018. All B-1 supersonic activities will occur above 20,000 feet Mean Sea Level and all transient fighter supersonic activity will occur above 10,000 feet Above Ground Level. Residents living under the following PRTC military operations areas may be affected by these activities.

Ellsworth AFB is home to a Superfund site so are Malmstrom AFB, Montana; Minot AFB, North Dakota and FE Warren AFB, Wyoming. All participate during the so-called "Combat Raider" deployments in the Powder River Training Complex.

General aviation, private pilots, climate watchers, even some Republican landowners and ranchers are concerned the exercises could exacerbate drought conditions that persist in a region where dried grasses are causing early Spring fire danger.

In a related story, the Air Force is seeking to expand a training area in drought-stricken New Mexico. Secretary of the Air Force Heather Wilson is a former US New Mexico US Representative and President of South Dakota School of Mines and Technology.


NASA: "Human activity has a visible effect on cloud cover" and jet contrails should be added to thinking about global warming as they cause significant warming. @DrKeithClimate how is this a conspiracy? NASA just said it. https://t.co/hOuL8fsIwE
— Dr Naomi Wolf (@naomirwolf) April 14, 2018

Email ThisBlogThis!Share to TwitterShare to FacebookShare to Pinterest
piled in Earth, I-25, montana politics, sd politics, us politics, wyoming

The report comes on news that states where cannabis is available legally patients are using fewer opioids and after the Albuquerque city council voted to decriminalize possession of less than an ounce.


New Mexico Democrats adopted a party platform during last weekend’s pre-primary convention that, for the first time, supports the legalization of recreational marijuana use statewide. Specifically, the platform adopted last weekend by the Democratic Party of New Mexico – with more than 90 percent of delegates voting in favor – includes a provision that Democrats will support the decriminalization and legalization of cannabis in the state. [Albuquerque Journal]

The release from the New Mexico Department of Health is linked here.
Posted by larry kurtz at 7:02:00 AM No comments: