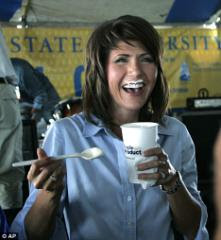 Rep. Kristi Noem (earth hater-SD) visited the disaster area that is Pierre for a few minutes today. During an undress address to the legislature Noem chastened the men in the chamber to keep their dicks in their pants during the session.

She's in town reassuring donors that she's toiling in DC applying her teabagger skills bringing pork to her failed red state while defending her actions to her Kochtopus handlers.

Country of Origin Labeling (COOL) is expected to be included in a farm/food bill somewhere in an alternate universe.


Funny. MT @ArgusMontgomery: @RepKristiNoem on #farmbill "When this bill gets signed and put into law in next week or two…" #sdhouse #sdsen
— interested party (@larry_kurtz) January 22, 2014

Infrastructure in the state's isolated capital is breaking down and Pierre's Republican mayor is up to her areolae in red state problems. She's whining again:


Pierre Mayor Laurie Gill says the city is looking at the idea of a federal Essential Air Service subsidy to help with the city’s air service. City officials have been frustrated in recent months with the number of flight cancellations and delays that have occurred. The city’s lone commercial service, Great Lakes Airlines, connects Pierre to both Denver and Minneapolis. Essential Air Service funding is used to help smaller communities maintain access to the national air transportation. That is done by subsidizing two to four round trips a day to a major hub airport. [KCCR Radio News]

Gill has announced she will run for yet another term as the failing city's mayor.


Great Lakes Airlines, which connects Pierre to both Minneapolis and Denver, has struggled this fall flying all of its flights. One of the reasons is new federal guidelines that require co-pilots to have more flying hours. When Great Lakes does not have enough pilots who meet those requirements; that means cancellations or delays in flights. [KCCR]

The 41st anniversary of Roe against Wade has prompted at least one cult to hunt some witches:


In Rapid City, the Cathedral of Our Lady of Perpetual Help is hosting a prayer service for 24 hours. The day of prayer began at 7:00 a.m. Wednesday and will continue until 7:00 a.m. Thursday. Over the past several decades, anti–abortion groups have taken steps to put small limits on the procedure in conservative states. [KOTA teevee]

jesus, mary and joseph: give me strength.
Posted by larry kurtz at 4:17:00 PM

Wow. You are really mean. Have you thought of antidepressents?

Anti-depressants?!! Fuck that. I prefer alchohol!