Montgomery: Noem's MILFness her only asset? 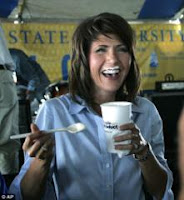 David Montgomery deleted all the responses to the post at his blog, Political Smokeout, about South Dakota's ape-like legislator, Troglodyte earth hater Stace Nelson. Apparently, respondents have few nice things to say about Rep. Nelson, although one rooter's comments reappeared.

After wading through the obituaries in the Sioux Falls Argus Leader, a reader noticed that in this morning's story on that state's US House race, Montgomery appears to rue the absence of substance surrounding SD's At-large Representative Krusti Noem as he asks: Who's running for House anyway?

For the record: Democrat Matt Varilek has yet to win the endorsement of interested party. His denial of marriage equality is wrong and he has not stated his position on the legalization of cannabis for adult enjoyment.

Prof. Jon Schaff, interviewed as a politics expert in DM's piece (fucked if i know why other than Blanchard's out of town), has bravely taken on some blogging at GOP-owned South Dakota Politics amidst withering fire from Democrats fired up by the meltdown of the state's earth hater party: he kindly mentions this regular commenter over there.
Posted by larry kurtz at 8:22:00 AM