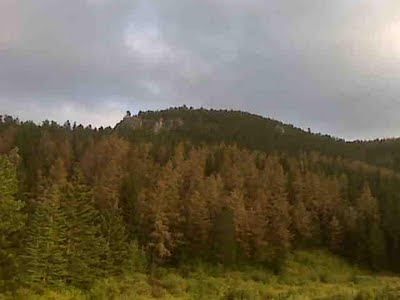 Recall that the collapse now taking place on the Black Hills bioregion was forecast in 2002.

University of Montana entomologist Diana Six has weighed in on inconsistencies in a report published in the Black Hills Pioneer about the so-called 'mountain pine beetle war.'


@larry_kurtz @bhpioneer This is very strangely written. Don't get the feeling the reporter knew the topic at all.
— Diana Six (@DianaSix1) January 19, 2014

@DianaSix1 @bhpioneer it would seem that a state forester caught a former legislator taking too many trees on an FS contract.
— interested party (@larry_kurtz) January 19, 2014


Six and her colleagues have published a paper questioning the conclusions reached by policy makers about whether to treat a native insect. Here is an excerpt from the abstract:


While the use of timber harvests is generally accepted as an effective approach to controlling bark beetles during outbreaks, in reality there has been a dearth of monitoring to assess outcomes, and failures are often not reported. Additionally, few studies have focused on how these treatments affect forest structure and function over the long term, or our forests'€™ ability to adapt to climate change. Despite this, there is a widespread belief in the policy arena that timber harvesting is an effective and necessary tool to address beetle infestations. That belief has led to numerous proposals for, and enactment of, significant changes in federal environmental laws to encourage more timber harvests for beetle control.


Some of these proposals have been enacted. By far, the most important legal change has been the Healthy Forest Restoration Act of 2003 (HFRA). HFRA is not alone. Another enacted bill created exemptions from environmental laws to allow timber harvest projects in a geographically limited area. As part of a massive supplemental appropriations act to address recovery from the September 11, 2001 terrorist attacks, Congress exempted a series of timber harvest projects in the Black Hills of South Dakota from any and all environmental laws; the law specifically stated that the projects were intended to reduce both fire risk and beetle infestations [15].

Inbreds in Custer County torched a mock-up of Dendroctonus ponderosae.


Senator Jon Tester (D-MT) is moving his Forest Jobs and Restoration Act through Congress: it trades 100,000 acres of logging for a million acres of wilderness. There is a precedent in the Black Hills. South Dakota's congressional delegation should support a similar bill for that state.
Posted by larry kurtz at 7:09:00 AM