Boycott of South Dakota hitting state in the wallet 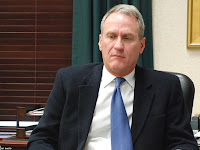 After signing a bill into law that discriminates against some couples seeking to adopt South Dakota's earth hater governor has fallen five places in popularity.

Visitor traffic in Deadwood is off so dramatically locals are pleading with younger people to move into the Gulch.


According to the monthly summary issued Monday by the South Dakota Commission on Gaming, gamers visiting Deadwood in February dropped $79.2 million in machines and on tables, an 11 percent decrease as compared to February 2016 and a 10.48 percent decrease year to date. This brings the total amount wagered for 2017 to roughly $156 million, resulting in roughly $7.5 million in taxable adjusted gross revenues for the industry in February. [Black Hills Pioneer]

And since every single media outlet in the failed red moocher state is a mouthpiece for the South Dakota Republican Party there is complete silence on the effects of the boycott.

Bill Janklow's idea of public broadcasting can't cover Pierre effectively because its funding is reliant on SDGOP, the Associated Press can't do it because they've been neutered so has the Sioux Falls Argus Leader. South Dakota's teevee stations are bound to Republican advertisers and nobody reads college publications.

Climate change denier Governor Denny Daugaard did have the temerity to travel to the Sicangu Oyate to tell tribal leaders they have better shit to do than restore Pe 'Sla to federal trust status taking it off the tax rolls but even that decision has gone off the rails.

But, applaud the nutball Republican efforts diverting attention from the party’s culture of corruption where murders and their covers up are commonplace by clogging the legislative session with christianic religionist argle-bargle.

"Dennis Do-nothing who sells out South Dakotans every chance he has and lies."

Been spreading the word to boycott South Dakota especially after the Governor signed SB-149 into law. People that were planning on vacationing there, Inquiring about moving to Sioux Falls, Rapid and elsewhere in the state and a few looking to move or start a business there. They did not know about the culture of corruption, rampant discrimination and how much influence the religious fanatics have. Regressive tax system and growing inequity amplified. 51st in teacher pay. All were surprised and have changed their plans and are telling others.

They think they have problems now with the AG economy and falling tax revenue now. I always fill up with gas before I cross the border so no or a bare minimum of dollars are spent in SD.

South Dakota's population is graying faster than nearly any other state because it's where white people go to die. Stay strong. Republicanism is unsustainable.

You had excellent posts and comments in todays Argus Leader Horowitz speaking event regarding the hypocrisy of the SDGOP and the cover up of clergy abuse. Anne Beal could not really respond. The Argus removed all the comments! There are some real hateful comments with some of their articles that never get removed.

Anne Beal the woman who somehow lives without a heartbeat or a heart to the astonishment of the medical community. What a cold and life sucking being.

Thanks, but it looks like comments are still up.