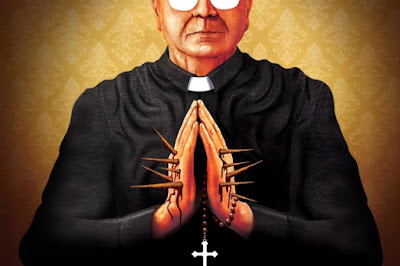 “I evolved past the ridiculous dogma that you start seeing when you look more broadly at the world.”

After a cassock with ties to the Sioux Falls diocese resigned amid clergy crimes, jaws are still dropping. When Bob Carlson was bishop of the Sioux Falls chapter of the Church of the Holy Roman Kiddie Diddlers he testified for the defense at Bill Janklow's manslaughter trial.

Like a dozen other US Roman churches have done the Helena, Montana chapter of the sect faced 362 claims of sexual abuse and filed for bankruptcy.


Since 2011, and as recently as this week—long after the specter of child sexual abuse by priests faded from the public scrutiny that peaked in the decade before—Brad Hall has filed 74 lawsuits on behalf of abuse survivors against priests from the archdiocese, which includes Albuquerque. In fact, the Archdiocese of Santa Fe is currently battling an effort by Hall to unseal what could be tens of thousands of pages of church records that were handed over as part of a series of lawsuits. It’s unclear how much priest sex abuse has cost the Archdiocese of Santa Fe. The Dallas Charter prevents bishops from demanding confidential settlements. [Santa Fe Reporter]

Although nothing untoward ever happened to me as an altar boy at Our Lady of Good Counsel my girlfriend in high school told me their family attended Mass elsewhere because Father Louis J. Miller had done something bad and was transferred to the Elkton parish under Sioux Falls, South Dakota cleric, Lambert Hoch who was born in Elkton.

Louis Miller was elevated to monsignor then was decapitated in an automobile accident near Pierre in 1968. Leonard Fox, the guy who succeeded him, was an asshole who drove me from catholicism.

The leader of the Church is slowly cleaning house of pederastic predators but is taking heat from Republicans for his stance on curbing human-induced climate change and from progressives for his intent to canonize a colonizer accused of raping children.

Ireland and Australia are leading calls to prosecute the cult's leaders.

Religion is a mental illness and the Roman Church is a criminal enterprise whose catechism is based on lies.

As lawsuits and the US Department of Justice swamp the Church of the Holy Roman Kiddie Diddlers the future of the religious cult isn't looking very rosy.
Posted by larry kurtz at 6:15:00 AM

Email ThisBlogThis!Share to TwitterShare to FacebookShare to Pinterest
piled in catholics, I-25, sd politics