“There is still a lot of water in the flood pool.”

The Missouri River system still has an above average level of water in storage.


During the flood of 2011, the swollen river carried tons of sediment, dumped it into these backwater areas and filled them. Sediment deposits cut off slower side channels from the main river. It left fish, such as the endangered pallid sturgeon, without the habitat needed for survival. Through dredging, the corps is restoring those backwaters and side channels and reviving that habitat. Wallace said wildlife and vegetation are returning to these areas, which didn't have the visibility of flood-damaged structures such as levees and revetments. Those projects will help ensure the river's ecological diversity, said Dave Swanson, director of the Missouri River Institute at the University of South Dakota. [Nick Hytrek, Sioux City Journal]

And, from Lake Sakakawea above North Dakota's Garrison Dam:


The corps will unveil its annual operating plan for the Missouri River in a public meeting at 11 a.m. Tuesday at the Bismarck Event Center. State engineer Todd Sando, who will present testimony at the meeting, said a number of factors are contributing to the risk of ice-induced flooding this winter. Sando said the corps’ plan is to release around 24,000 cfs of water through the dam during the winter. “That can create issues during the winter,” Sando said. Higher releases after the Missouri River freezes for the winter could cause overland flooding, as has been the case in some winters since the 2011 flood. “Public input and comments will be fundamental factors at this meeting,” he said. “There is still a lot of water in the flood pool.” [Brian Gehring, Bismarck Tribune]

In related news: the vice-president of the GOP-owned South Dakota Farm Bureau is whining at the US Environmental Protection Agency for what she believes is usurpation of her God-given right to pollute the imperiled Belle Fourche watershed.

South Dakota's earth hater junior US senator is leading a crusade to block EPA from identifying non-point sources of pollution deposited by his GOP donors. 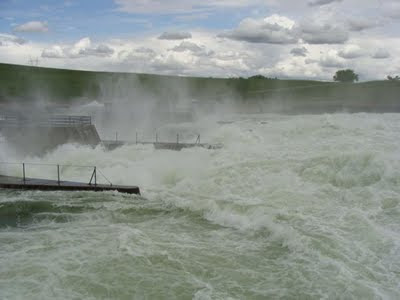 A report released Sept. 12, 2014, by the Government Accountability Office said a number of factors were behind the flood and there were no forecasting tools available to the Corps that could have prevented the event. “By June 2011, the volume of water coming into the reservoirs from the extreme rains and melting snow was so great that the Corps had no choice in June and July but to release water to accommodate the inflow and prevent damage to dam infrastructure, such as spillways in danger of being overtopped,” the report says. [Joel Ebert, Pierre Capital Journal]

US Senators called for testimony from the attorney general of the State of South Dakota. It's suing the US Army Corps of Engineers to determine ownership of so-called 'surplus water.'


Fort Pierre and Pierre, South Dakota, sit at the head of Lake Sharpe. The Army formed Lake Sharpe after the closure of Big Bend Dam in 1963. The capital of South Dakota and its sister city now face a flood of epic proportions because of a combination of high water releases from Oahe Dam and the presence of a silty delta at the head of Lake Sharpe, which begins just southeast of Fort Pierre. [Muddy Mo: Reservoir Siltation and the Flood of 2011]

Hardly coincidentally, a former earth hater governor of South Dakota after having built a house in a swamp that flooded received a generous self-reimbursement from insurance coverage underwritten by his own company. He's the same US Senate candidate under federal investigation for his role in the EB-5 Bendagate scandal. He also lavished $75 million of state money on political cronies and donors and flagrantly violated the Indian Child Welfare Act.

A sleazeball earth hater state senator who also built a house in a swamp sued the Corps.


The Corps sells 24% of US hydropower capacity. The Corps enjoys sovereign immunity; expect a political powerplay directed at them from Marty Jackley.

With federal investigators crawling up every GOP asshole in the state with microscopes there may be justice served yet.