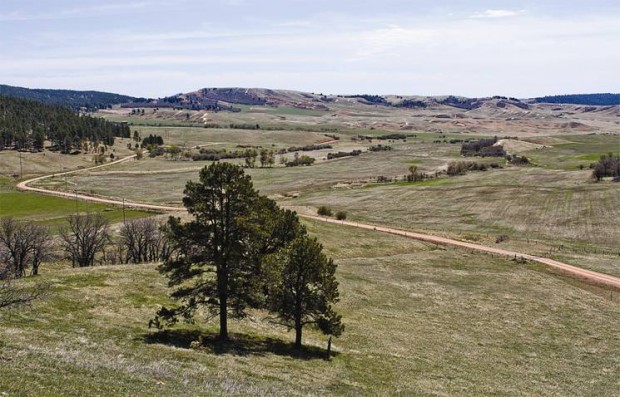 The divide between the Little Missouri and the Belle Fourche drainages is not very wide: less than a mile just west of the Missouri Buttes. At that location it's not difficult to visualize how the Clovis People migrating into the region some 12,000 years ago seeking shelter and food sources found their way into lands free of glaciation.

The Casper Star-Tribune has recently posted several articles on mountaintop-removal mining for rare earth minerals in that part of the Wyoming Black Hills. Here is a snip of the latest piece with links added from the series:


Rare Element Resources, a Vancouver-based company, hopes to spend around 40 years mining a portion of the Black Hills National Forest in northeast Wyoming for some of the planet’s most valuable minerals. “I would hope that the Wyoming DEQ sets good standards and makes sure we don’t end up poisoning Beaver Creek and Cook Lake, which are both downstream,” said Ed Mignery, whose house is down the road from the mine site. Of particular concern to area residents are creeks that start near the proposed site and eventually wind their way into the Belle Fourche River. Sundance Mayor Paul Brooks won’t tell people if he is for or against the mine project. Concerns range from potential groundwater contamination to waste rock management. The Forest Service has received more than 150 comments so far on the proposal. [Christine Peterson, Some area landowners concerned about proposed rare earth mine]


The Bear Lodge Project has three main components: 1) construct and operate an open pit mine and associated facilities on National Forest system lands and private lands within the Bearlodge Mountains in Crook County, Wyoming; 2) construct and operate a hydrometallurgical plant for further concentration and recovery of rare earth elements on private lands in Upton, Wyoming; and 3) continue mineral exploration activities by drilling and trenching on the Bearlodge Mountains, Wyoming. [press release, Black Hills National Forest]

More Canadians are taking advantage of Wyoming's continued assault on the Black Hills. A mine intended to remove Bull Hill at the headwaters of the Beaver Creek drainage in the Bear Lodge could pollute the Belle Fourche and Cheyenne Rivers even worse than they are now.


More than 140 people attended the first public meeting held by the Black Hills National Forest to address the mine plan. If approved, it would be the second rare-earth mine in the U.S. Only two rare-earth mines exist right now outside of China – one in Australia and another in Mountain Pass, California. The mine would be about 6 air miles north of Sundance in northeast Wyoming and would cover about 1,700 acres in the Black Hills National Forest. The Forest Service is accepting written comments from the public on the plan until April 30. A draft environmental impact statement will be presented for public comment in the spring of 2015 with a final objection period in the winter of 2015. [Christine Peterson, Residents question safety of proposed rare-earth mine, Casper Star-Tribune]


Rare Element Resources has initiated a land exchange that, if approved by the Board of Land Commissioners, will allow the company to acquire 640 surface and mineral acres of State Trust Land near Warren Peak, adjacent to the planned Bull Hill Rare Earth Mine. In exchange, the State of Wyoming will acquire 400 acres of additional land in the Little Grand Canyon area, says Lisa Reinhart, Office of State Lands and Investments. The exchange will aid RER in its development of the Bull Hill Rare Earth Mine, allowing waste rock and low grade material to be stored after extraction from the Forest Service land upon which the mine will sit. The detailed analysis is now available for public review on the website at lands.state.wy.us and the comment period is open until March 15, while the final Board consideration date is anticipated for April 11.

The proposed mine project is not far from Cook Lake, where landslide activity has closed the campground: the area surrounding the site is prone to slides. The chances for breaches are myriad.

Help Paha Sapa and kill this assault on treaty lands.