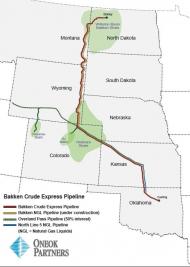 The Wyoming Black Hills are under assault from Canadian mining firms and out of state earth scorching interests.

Despite landowner objections construction continues on portions of the Bakken Pipeline originating near Sidney, Montana; and, if completed, it would transport raw natural gas liquids (NGLs) south through easternmost Montana and Wyoming into northern Colorado then connect to the existing Overland Pass Pipeline.

A court ruling will determine whether the further destruction of sage grouse habitat will continue. Expert testimony was heard from a well-known South Dakota School of Mines hydrologist according to Sarah Pridgeon of the Sundance Times:


A decision is awaited from Judge John R. Perry as to whether Oneok Partners will be able to claim its right of eminent domain on the two final pieces of private land needed to complete the Bakken Pipeline. Judge Perry is currently considering the written closing arguments submitted by Oneok and the defendants, Bush Ranches and Watson Land LLC.

The right to invoke eminent domain rests on Oneok proving three things: that the public interest and necessity require the project or use of eminent domain to be authorized by the Wyoming Constitution; that the project has been planned and located in the manner most compatible with the greatest public good and least public injury; and that the property in question is necessary for the project. Oneok did not contest the evidence of the four geologists who testified during the case – Dr. Arden Davis, Dr. Perry Rahn, Seth Wittke and Brian Reck – that gypsum beds exist in the Spearfish Formation under the defendants’ properties.

The proposed pipeline would pass through Crook County intersecting with the Belle Fourche River just west of Belle and would cross the Redwater River between Aladdin and Beulah. It would cross the Cheyenne River near Mule Creek Junction west of Edgemont, and the North Platte near Fort Laramie terminating at the divide with the South Platte River not far from the tiny Colorado hamlet of Last Chance that was reduced to a pile of rubble by a recent wildfire.

Pridgeon also reports that a Canadian company ripping up part of Bull Mountain in its search for rare earth minerals just south and east of Devils Tower is suspending operations for the winter.

Yellowstone Public Radio is reporting that a segment of newly-built high pressure TransCanada gas pipeline has exploded 20 miles west of Gillette, Wyoming. The Casper Star Trib has a story:


﻿A natural gas pipeline west of Gillette exploded Wednesday night. It shook nearby homes and echoed at least 30 miles away but didn’t cause any injuries or property damage, officials and a resident said. The blast ripped open a 60-foot section of the Bison Pipeline and shot several pieces of 30-inch-diameter pipe around the bluffs on land about 20 miles west of Gillette at about 7:30PM.

The Gillette News Record has photos.


﻿It doesn’t take an engineer to see that TransCanada’s recently installed Bison natural gas pipeline has big problems along parts of its 97-mile route through southeastern Montana. Wide fissures, some 3 feet deep, have opened directly above the 30-inch, high-pressure pipeline that began delivering natural gas from Wyoming’s Powder River Basin to the Northern Border Pipeline in North Dakota on Jan. 14. When construction was in progress on the 50-foot right of way, the company had the temporary right to use an additional 70 feet for equipment and work space. Which leads to another question — if Bison doesn’t have temporary easements, do they have to renegotiate terms when they return to fix the damaged right of way?

From a July 5th piece in the Edmonton Journal:


TransCanada spokesman James Millar noted Keystone XL, which would add 830,000 barrels per day of oil supply to refiners in the Gulf, has yet to be constructed. As part of a recent U.S. push to increase pipeline integrity, TransCanada agreed to comply with 57 recommendations by the national regulator, including installing automatic shut-off valves closer than industry norms, as well as bumping up the number of visual inspections and burying pipe crossing waterways deeper than standard regulations. Similar technologies were used in TransCanada's 400-million-cubic-foot Bison natural gas pipeline which was launched in January. "We're building the most advanced infrastructure. We did that with Bison, we'll do that with Keystone XL," said Millar.

Switches connected to servers can be told to engage and disengage often enough as to cause equipment failure.
Posted by larry kurtz at 7:01:00 AM

Email ThisBlogThis!Share to TwitterShare to FacebookShare to Pinterest
piled in Earth, I-25, red state failure, wyoming