Franke Wilmer is passionate about Montana's commitment to social justice. In her remarks to the assembled Democrats at the Jefferson County Fairgrounds she described the responsibilities of the United States to uphold tribal sovereignty, vowed to work closely with Montana's seven landed tribes and with the Little Shell band now seeking federal recognition. From her website:

She is serving a third term as a citizen-legislator in the Montana House of Representatives where she has served on the Education; State Administration and Veterans Affairs; and Fish, Wildlife, and Parks committees. Franke worked for 16 years as a carpenter, waitress, legal secretary, sales clerk, and substitute teacher to provide for her family and eventually, to complete college and earn a PhD. She has written three books, many articles and book chapters, received the prestigious Wiley Award for Meritorious Research and Creativity, and won numerous teaching awards including the national Pi Sigma Alpha Excellence in Teaching Award in Political Science.

Mail her a check.

The current At-large representative for Montana, GOP earth hater, Dennyuppyfied Rehberg, is expected to be crushed in his bid to unseat Senator Jon Tester.

Fellow cannabis researcher, Bob Newland, the brilliant though sometimes quixotic Libertarian from Hermosa, is mulling a run for the seat currently held by disgraced Republican earth hater Lance Russell. Join ip in supporting a non-Democrat by sending him a check, too. 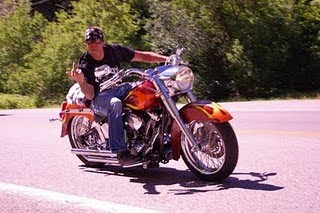 The enemy of my enemy is my friend.


The goddess recently attended a pharmacology conference where she learned of this story from Mexico City:

Rodolfo Villarreal, Juan Palacios, Keith Parker and Lilian Calderon carried out the study, "Gene inflammatory expression profiling in right versus left ventricles in young urbanites: What is the long-term impact of myocardial inflammation in the setting of air pollution?" The researchers are from the University of Montana (Palacios, Parker, Calderon), the Instituto Nacional de Pediatria in Mexico City (Calderon) and the Big Sky High School in Missoula, Montana (Villarreal).

Missoula has a long history of wood-burning stoves and air stagnation alerts. Here is the really creepy part: these toxins are affecting the blood/brain barrier allowing bacteria from mice and dog feces to infect the hearts and brains of children in Mexico City. Higher dog concentrations led to increased rates of infection. The researchers concluded that:


•polluted air can create inflammation, even in the hearts of young individuals
•the right ventricle responds differently than the left
•endotoxins play a role in the inflammation

Ah, but you misquote my intent. I am actually considering not running. I am considering forming an exploratory committee to examine the advantages to society that would accrue should I not be elected to the So. Dak. statehouse.

Checks, of course, are welcome. It would probably cost in excess of $50k to elect someone of my considerable qualifications, but it would cost far less to dissuade me from squandering said qualifications on an attempt to steer the Chambers of Hunt and Hickey in a more productive direction.

Mail them checks to me!

Well, as i live and breed. Thought you'd never get here.