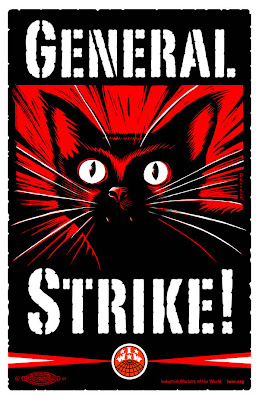 The Industrial Workers of the World has posted a do-it-ourselves pamphlet on organized resistance against tyranny:

In essence, a general strike is the complete and total shutdown of the economy. A general strike can last for a day, a week, or longer depending on the severity of the crisis, the resolve of the strikers, and the extent of public solidarity. During the strike, large numbers of workers in many industries (excluding employees of crucial services, such as emergency/medical) will stop working and no money or labor is exchanged. All decisions regarding the length of the strike, the groups of workers who continue working, and demands of the strikers are decided by a strike committee.


University of Minnesota scientists are killing cancer cells in mice with salmonella:

NPR reports that nanodiamonds are also showing to be effective anticarcinogenic agents:

If you're feeling technical, here are some details. When the nanodiamonds are washed in acid, their surfaces gain carboxyl groups and they become "sticky." Small molecules like doxorubicin and large molecules like strands of genetic material can grab on. The nanodiamonds even stick to each other when they are attached to doxorubicin, forming clumps with drug-filled pockets.

Email ThisBlogThis!Share to TwitterShare to FacebookShare to Pinterest
piled in Earth, manifesto, us politics