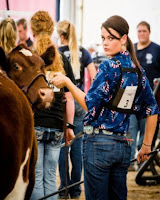 
Catastrophe, tragedy, a devastating loss cannot even begin to describe the turmoil that has unfolded for hundreds of ranchers across the states of Kansas, Oklahoma, Texas and Colorado following the devastating fires of March 2017. [smokin' hot Kelly Morrison, Farm Forum]

Climate disruptions are hitting corn growers who rely on federal subsidies to farm, Mexico is threatening to retaliate against the protectionist Trump junta, and even the earth hater Heritage Institute says it's time to end ag bailouts.


Congress needs to stop fleecing American taxpayers to further enrich large agribusinesses. It can start immediately with ending bailouts and limiting the exposure that taxpayers have in connection with these massive new farm-handout programs. That $15 billion should be in the pockets of taxpayers, not large agribusinesses. [Heritage: Handouts to the Agriculture Industry Are Out of Control]

Desertification driven by overgrazing has turned parts of the high plains into scorched earth.

This year South Dakota's GOP congressional delegation is stumbling all over itself trying to protect donors like Monsanto and Syngenta from their accountability for the state's impaired waters. John Thune (earth hater-SD) has rolled out his farm bill template for moral hazard and socialized agriculture while South Dakota's lone US House member and her fellow earth haters support it.

Moral hazard is the flip side of self-reliance and the livestock industry knows emergency declarations will provide bailouts for those who choose risk instead of burning off dry grasses minimizing losses.

Newly-confirmed Secretary of Agriculture, earth hater Sonny Perdue, could very easily destroy the US Forest Service instead of the implementing the reforms proposed by this interested party. USDA's division of death, so-called "Wildlife Services," is to blame for the widespread use of lethal poisons like cyanide bombs that kill family members.

Domestic livestock have contributed to catastrophic wildfire conditions and Republican welfare ranchers are the real ecoterrorists who hate subsidies unless they benefit from them.