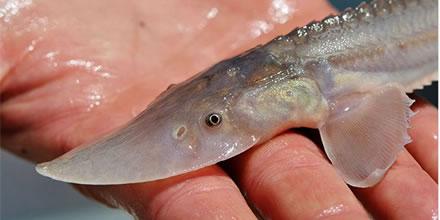 
According to American Rivers, an advocacy group that tracks U.S. dam removals, 72 dams in 19 states were torn down in 2014, a record. That is roughly double the annual number from 10 years ago. Some 1,185 dams have been removed since 1912, according to the group. The fleet of U.S. dams, however, is still enormous. The Army Corps of Engineers counts at least 87,000 dams in its database. Removing dams produces its own benefits. Public safety is enhanced by reducing the risk of a dam failure, and moribund freshwater fisheries are rejuvenated when a segmented river is reconnected. [Circle of Blue]

Below the Missouri River dams pallid sturgeon are showing signs of recovery but above?


Pallid sturgeon come from a genetic line that has lived on this planet for tens of millions of years; yet it has been decades since anyone has documented any of the enormous fish successfully producing young that survive to adulthood in the upper Missouri River basin. Now, fisheries scientists with the U.S. Geological Survey, Montana State University and the U.S. Fish and Wildlife Service have shown why, detailing for the first time the biological mechanism that has caused the long decline of pallid sturgeon in the Missouri River and led to its being placed on the endangered species list 25 years ago. In a paper published this week in the journal Fisheries, the scientists show that oxygen-depleted dead zones between dams in the upper Missouri River are directly linked with the failure of endangered pallid sturgeon hatched embryos to survive to adulthood. Given what the new research shows about how no oxygen is available to hatched pallid sturgeon embryos, the authors of the paper propose that officials will need to consider innovative approaches to managing Missouri River reservoirs for pallid sturgeon conservation to have a chance. [press release, US Geological Survey]

Another Montana researcher is probing the relationship of whitebark pine with the slippery jack mushroom. Confirming my own long-held suspicion she has learned that antimicrobials are disrupting fungal communities throughout the Mountain West.

President Obama: decertify the dinosaurs that are the main stem dams, tear the earth fuckers down and rewild the West.


A warning that ice conditions are changing quickly on all reservoirs in North Dakota and South Dakota. http://t.co/6XwpFZzFLt
— KELO News (@keloland) January 27, 2015