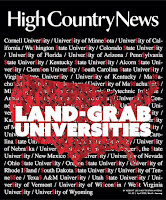 Last December in an episode of The Keepers, a podcast produced by the Kitchen Sisters and NPR, the lead Archivist at the National Archives told listeners lawyers are combing the records for treaties with tribal nations none of which have been honored by the United States. Now, in a story told by Robert Lee and Tristan Ahtone, a former reporter at Wyoming Public Radio, the Morrill Land-Grant Acts are linked to the Native American Genocide.


In 1862, President Abraham Lincoln signed the Morrill Act, which distributed public domain lands to raise funds for fledgling colleges across the nation. Now thriving, the institutions seldom ask who paid for their good fortune. Their students sit in halls named after the act’s sponsor, Vermont Rep. Justin Morrill, and stroll past panoramic murals that embody creation stories that start with gifts of free land. “It’s called genocide,” admitted California Gov. Gavin Newsom, D, last year when he issued a formal apology for the “dispossession and the attempted destruction of tribal communities.” [Land-grab universities: Expropriated Indigenous land is the foundation of the land-grant university system]

Email ThisBlogThis!Share to TwitterShare to FacebookShare to Pinterest
piled in public radio, tribes, us politics