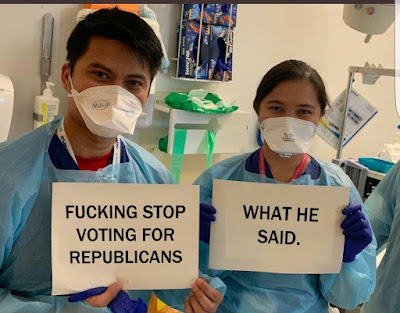 Global pollution levels have taken a temporary nosedive but that hasn't stopped the Trump Organization's war against the states. Now some governors are fighting back against the US Environmental Protection Agency.


Democratic Gov. Michelle Lujan Grisham, who has been a constant critic of the president, said water is the most important natural resource for the arid state, and stripping protections is an affront to all who call New Mexico home. “My administration is committed to protecting New Mexico’s precious waters and will consider all legal options to prevent this rule from going into effect. This is far from over,” she proclaimed in a statement. [New Mexico officials call US water rollbacks 'disastrous']

Michigan's governor has been targeted by the Trump regime.


The Michigan Department of Environment, Great Lakes, and Energy is still trying to figure out all the implications of the USEPA’s decision to end enforcement of some of its regulations. Hugh McDiarmid is Communications Manager for the state agency. “EGLE is still actively providing regulatory oversight and is responding to pollution events to protect Michiganders’ health and the environment. We’re still on the job. More than 90 percent of our staff is working remotely, but we are still enforcing pollution laws and continuing to do work,” McDiarmid said. [Michigan agency stepping up while U.S. EPA is stepping out]


This is an open license to pollute. Plain and simple. The administration should be giving its all toward making our country healthier right now. Instead it is taking advantage of an unprecedented public health crisis to do favors for polluters that threaten public health. We can all appreciate the need for additional caution and flexibility in a time of crisis, but this brazen directive is an abdication of the EPA’s responsibility to protect our health. [press release]

Washington's governor has also pledged to stand up to the Trump White House.


Governor Jay Inslee took a few minutes Wednesday to sign an important long-term measure passed by the legislature before the COVID-19 crisis intensified. Washington’s move is further demonstration of the fact that while the Trump administration is moving to stall progress on vehicle pollution standards, state leaders are continuing to step up, recognizing that cleaner vehicles lead to cleaner air, more jobs and investments and less dangerous carbon pollution. [NRDC]

Email ThisBlogThis!Share to TwitterShare to FacebookShare to Pinterest
piled in Earth, I-25, public radio, us politics