From Left in the West:

I haven't seen polling on this yet, but as things stand now, the odds seem to be against Dennis McDonald defeating Denny Rehberg in November. The biggest thing going against McDonald is how much less money he has than Rehberg. According to OpenSecret.org, Rehberg has raised well over a million dollars in this campaign cycle (a large part of it from large corporations) while McDonald has raised less than $200,000. Rehberg still has over $600,000 to spend on his campaign while McDonald has only $18,000 left. As the race tightens, look for Rehberg to try to bury McDonald under a deluge of negative TV ads.

In Rehberg's Bozeman debate with McDonald, where McDonald skillfully took him apart over his voting record (consistently voting against working-class people and for large corporations and the wealthy), Rehberg looked quite weak. He had no real defense for his record. Instead he retreated to vague slogans like "Stand up for America."

Rehberg is pinning his hopes on low-information voters, especially older people. He's not even trying to reach younger, better-educated voters. I gather, from watching the Bozeman debate, that his strategy is to attack President Obama and Speaker of the House Nancy Pelosi, though he never explains why they deserve to be attacked. All he knows, or all his handlers know, is that uninformed voters have been conditioned by Glenn Beck and other right-wing charlatans to react negatively to the words "Obama" and "Pelosi."

Speaking of right-wing charlatans, do people know that in July Rehberg joined, along with thirty-nine other extremist members of congress, Michele Bachmann's Tea Party Caucus? Bachmann (R-MN), some will recall, has urged people to protest Obama's nonexistent reeducation camps for young people. She want to investigate "un-American" members of congress, and she's dead-set against the census and incandescent light bulbs, both of which she considers government plots.

But Rehberg, by so enthusiastically joining this crazy woman's caucus, has shown he's okay with her delusions. Or, if he knows they're delusions, he thinks he can use them to manipulate gullible people.

The only reality-based Montanan running for congress this year is Dennis McDonald. Too bad he doesn't have more money. Voters shouldn't let vague and delusional thinking win the day just because it has strong corporate backing.

Montana's often-errant, ED med-aided-At-large member of the US House of Representatives is well fed, generously-oiled Republican, Dennis Rehberg. Last summer his plastered host beached a boat at 30 knots, fellow inebriate Rehberg aboard, nearly killing at least one in the party. 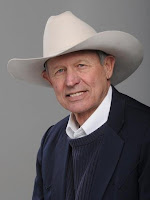 Dennis McDonald is a still-recovering refugee from a big city law practice now running cattle and developing on his experiences after herding Democrats as party chair. He has been a generous visitor to Jefferson County, to the Basin Community Hall at least twice, and listened politely as ip ranted on Sudden Aspen Death and the Final Solution to pine infestation. His platform reflects Montana's frustration with its collapsed forests.

Email ThisBlogThis!Share to TwitterShare to FacebookShare to Pinterest
piled in montana politics

Montana is in a very difficult situation with its elected senate officials. They are both idiots and very corrupt. If you like to read a funny article about our Montana senators Jon Tester and Max Baucus, take a look at this blog entry: http://identitynoise.com/blog/?p=209

you will truly LOL